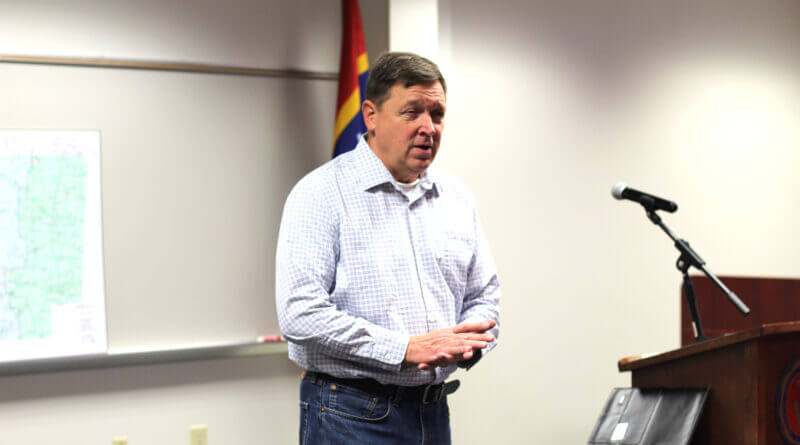 Northern District Transportation Commissioner John Caldwell made himself available Tuesday morning for citizens to come and talk with him about transportation issues in DeSoto County. No one took him up on the opportunity at the Northwest DeSoto Center in Southaven, however.

While the lack of attendance may indicate non-interest in road issues to some, Caldwell knows that is not necessarily the case.

Tuesday’s meeting was the first of several open forums Caldwell is holding across the Northern District to gauge public concerns about transportation issues. It was the first of eight such meetings planned over a three-day period. We reported on the complete schedule when it was first released by Caldwell’s office.

Building roads, such as the I-55 expansion that has been top of mind the past several months in particular, takes time and money, Caldwell said. A lot of time has gone by on that project, but money has been difficult to come by.

“When I was county supervisor back in the 1990s and early 2000s, we were promised that I-55 would be widened all of the way to Hernando and it’s going to take 12 years of construction to do it and it was supposed to start,” Caldwell related. “We’ve got a long way to go to make something happen.”

The money continues to be in short supply compared to the need, although the state Legislature did bump up the budget in the last session from $1.2 billion to about $1.426 billion, Caldwell said.

“The money that we have is half federal and half state and almost all of it is fuel tax money,” Caldwell noted. “Some of the state’s money goes away from the highway department. It’s very misleading when the politicos keep telling you that we have all this new money because we really don’t. They’re showing you old money and new money put together.”

Fuel tax money is shrinking because of more moves to electric vehicles and better gas mileage from gas-powered vehicles. The user-pay system, as Caldwell labels it, is a little broken right now.

“It’s not paying for enough roads and it’s going to pay less and less for roads if we don’t address electric vehicles,” Caldwell said. “They pay a little penalty on their state taxes. But we’ve got to figure out how to keep that user pay system alive.”

Caldwell touched on the Driving DeSoto petition initiative that we first reported on back in August. About 3,000 people have signed the petition to show state and federal officials the dire need for expanded roadways in DeSoto County. Caldwell feels the number should be much higher.

“It’s somewhat grass roots and somewhat from the top down,” Caldwell said. “It’s a mix of people saying we have issues up here and the state of Mississippi is not addressing them. How we make sure they’re going to be addressed is a matter of time and it’s a matter of money.”

But Caldwell did note the I-55 widening is moving forward but currently deals only from Goodman Road to Church Road.

“It’s in final engineering and that should be finished in 2023,” said Caldwell. “The right-of-way acquisition is done where we need it to be. It’s not sitting idle, we are moving forward to widen that road. But it just stops at Church Road. We have to keep moving south and get to the Commerce Street interchange in Hernando and get that addressed.”

The transportation commissioner also pointed out the Legislature provided $45 million and $35 million respectively for construction and maintenance. It’s difficult to make much future planning, however, when MDOT only knows on a yearly basis what funding will be available.

“We have to go back each year and ask them to do it again,” he said “We’re looking for a perpetual source to help make it where we’re not begging every year not knowing.”