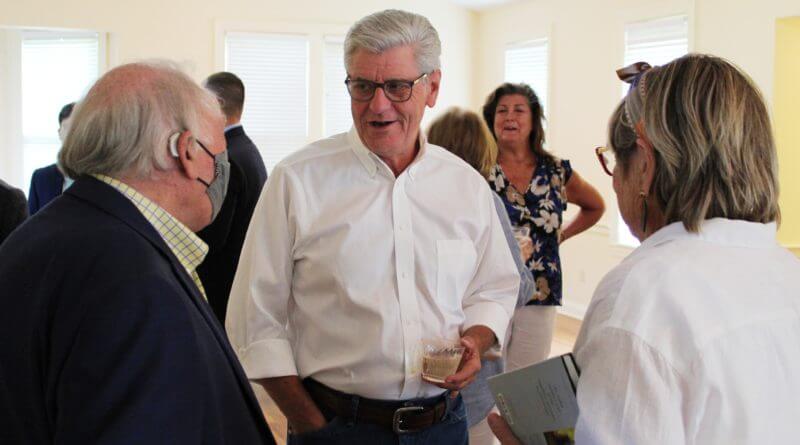 While former Mississippi Gov. Phil Bryant has been busy on his Copiah County farm growing pine trees and helping grow economic development as part of Bryant Songy Snell Global Partners, he continues to view what is happening in his state since leaving office at the end of 2019 and is not afraid to speak out.

For instance, Bryant recently addressed an issue that will be on the November general election ballot. The former governor came out with an op-ed piece detailing his opposition to Initiative 65 and its Alternative 65A, which would allow medical marijuana usage in the state of Mississippi.

There are actually two questions on the ballot regarding medical marijuana in the state. Initiative 65 was qualified to be on the ballot and asks to allow that it be made available to Mississippians with debilitating medical conditions, including cancer, epilepsy, and ALS, who are under a doctor’s care. The issue was placed on the ballot after 228,000 residents signed petitions to have that happen, according to an advocacy group in support of the measure called Medical Marijuana 2020.

However, the state Legislature responded and put on the ballot Alternative 65A, which lawmakers labeled as House Concurrent Resolution 39, a question that features similar wording than Initiative 65, but the cost and revenue impact associated with the initiative is “undeterminable,” the ballot reads.

The Ballotpedia website placed both items side-by-side for comparison.

On the ballot, Initiative 65 lists the overall first-year cost estimates to the state to be more than $11 million. Anticipated expenses for the first year to implement the program are pegged at more than $24 million. The anticipated revenue from initially starting to legally sell the drug in the state is at $13 million, with $2.5 million for user ID cards, $500,000 for commercial licenses, and sales tax of seven percent bringing in about $10 million.

The ballot issue reads that following year expenses are estimated at $15 million, anticipated total revenue is $26 million with the overall annual revenue of more than $10.6 million earmarked to support a state marijuana program in Mississippi.

Initiative 65 also prohibits smoking marijiana in public, puts a limit on the amount in possession, caps the cost for medical marijuana patient ID cards at $50, and sets an Aug. 15, 2021 deadline for medical marijuana cards to be issued. There are no such restrictions in Alternative 65A, except that usage be limited only to terminally ill patients.

Voters will have the option to approve either question or be against both questions, then must also provide a preference for either the initiative or alternative, in case a majority votes to support either one.

In Southaven recently for a campaign event supporting Supreme Court Justice Josiah Coleman’s re-election bid, Bryant spoke about his opposition to both the initiative and the alternative.

“It’s going to be so easy to get where you can go to a pharmacist and get a doctor to write you a certificate and go get 159 joints a month and they want to add this to the Constitution,” Bryant said. “I don’t think the place of legalizing marijuana should be the Mississippi Constitution. I think it comes in conflict with federal law, so if you go and buy a firearm and you’ve been using marijuana they’re not going to sell you marijuana. I just think it’s a terrible, terrible idea.”

Bryant, a former narcotics officer, pointed out that marijuana is what he calls a “gateway drug” to other more dangerous substances.

“If they wanted to go through the process of getting FDA approval, that would be a different situation altogether, but they just want to sell it on every street corner and I’m against that,” Bryant said. “If they were to say it’s going to be a state law and we can sell it once it’s approved by the FDA. The FDA needs to approve anything that’s taken into my body as a pharmaceutical and this does not allow that.”

Bryant did say he approved testing and human trials for medical marijuana at the University of Mississippi Medical Center, “but this is just a Trojan Horse trying to get more marijuana onto the street and make rich people richer doing it.”

Supporters of medical marijuana in Mississippi say the program will be self-funded and regulated with the Mississippi State Health Department, which will regulate how it will be grown, processed, and made available to ensure safety and secure accessibility to the drug.

“Medical marijuana helps patients cope with pain, increases their appetite, suppresses nausea caused by treatments like chemotherapy, and reduces seizures, tremors, and other debilitating symptoms,” according to the Medical Marijuana 2020 website. “It can be offered in varying forms such as creams, tinctures, juices, smoking, vaporizing, edibles, and lozenges.”

The group claims 34 states, including Arkansas, have approved the use of medical marijuana.

While Bryant watches and comments on state issues, he is also working to attract more business to his state with his economic development firm.

“It’s a thing that I enjoyed the most about being governor, bringing more business and jobs to Mississippi,” Bryant said. “We’ve got a really good small business going, where we go out, find companies and say please come to Mississippi. We can help you weed through the problems of the government, find you a great location by doing site selection.”

His support for Coleman, who is seeking re-election for his Supreme Court seat against DeSoto County Chancery Court Judge Percy Lynchard, Jr., has been a long one.

“When he lived in Jackson we were neighbors together and he is just a fine young man,” Bryant said. “I know his passion for being on the Supreme Court. He’s a real conservative pro-business judge and that’s what we need more of in Mississippi.”