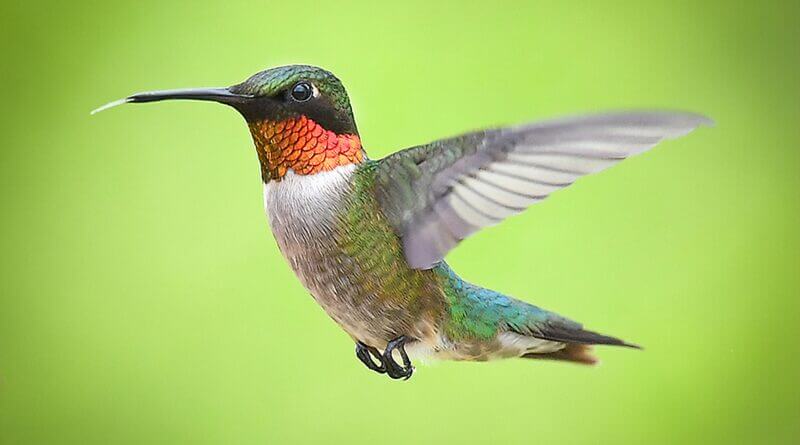 Honeybees and hummingbirds are remarkably similar—and different. They are similar in that they both spend a lot of time looking for nectar. But they are strikingly different in what they do when they find it. When a bee finds nectar, he takes a sip and then heads to the hive to tell everyone else about it. When he arrives, it’s like the arrival in a gold-mining town of a prospector who has just discovered the mother lode. Everybody gathers around the newly arrived worker bee who then excitedly tells the others about it. The worker goes into a wild dance. By the direction that he is pointing and the number of “waggles” that he does, he tells the other workers the direction the nectar is located and how far away it is.

Hummingbirds could hardly be more different. I know because I observe them every morning outside our kitchen window. I have hung a feeder there, and the farthest thing from a hummingbird’s mind is sharing it with anyone else. In fact, not only does he not go tell anyone about it, but he fights any other hummer who comes close.

When jet fighter planes engage in combat, their encounters are called “dog fights.” It would be more appropriate to call them “hummingbird fights.” These “fighters” divebomb each other, pursue each other, and, just when one is about to take a sip of nectar, another will come zooming in at only slightly subsonic speed to disrupt his meal. If you want to see a classic case of selfishness and defending your turf, witness the way hummingbirds relate.

By nature, I wonder which one we are more like—honey bees or hummingbirds? I hate to say this about our species, but my observation has been that too often we have a lot more in common with the hummingbirds than with the honeybees. Selfishness is second nature with us.

In an old Marx brothers movie, Groucho was making a small speech which included a familiar line. He said, “Give me liberty or give me death. . . or, give me something else, I’m open to suggestions.” “Give me,” is one of our favorite lines.

One of the problems with the hummingbirds’ fierce defense of the feeder at our house is that they have done absolutely nothing to produce it. I was the one who bought the feeder, filled it, and placed it there. The fact that it is there at all is a matter of grace. And yet, to watch one fight the others off, you would think that he was the one who was responsible for the whole thing.

So many wonderful things in our lives have been put there by the grace of God. We are surrounded by the wonders of His grace. We should drink deeply from them and be a gracious people. Honey bees or hummingbirds—which are you most like?