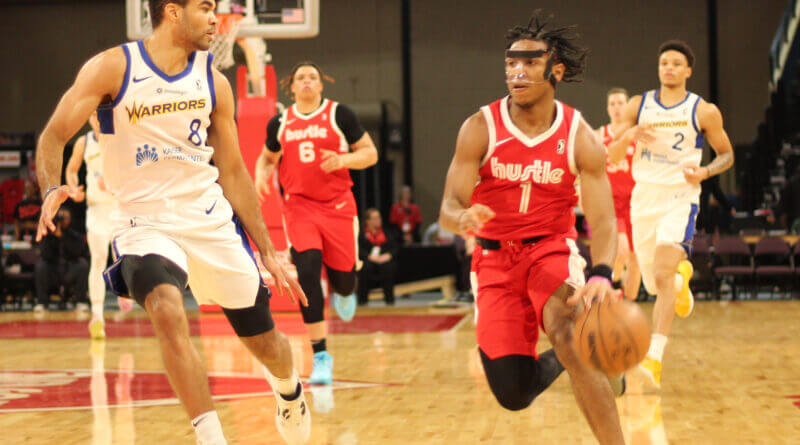 Since the NBA G League stopped calling the games part of the Showcase Cup, the Memphis Hustle have been dominating the Western Conference standings much like their parent club Grizzlies have been running through their foes on the basketball court.

With a few of the Grizzlies watching from courtside, the Hustle ran its record to 7-1 and remained a half-game behind the conference-leading Stockton Kings after a 140-131 victory over the Santa Cruz Warriors before 641 fans at the Landers Center.

It helps when you have seven players in double figures, four of those scoring more than 20 points, and your leading scorer coming off the bench.

“Our guys were playing the right way and playing hard,” said Hustle coach Jason March. “I loved our guys’ commitment to what we do from the guys coming in from the Grizz. It was a great effort.”

The leading scorer was Kenneth Lofton Jr., who hit for 23 points in the win. In the Showcase Cup series, Lofton was the team’s leading scorer in 10 of the 18 games played, but Tuesday he led the Hustle in scoring for just the first time in the regular season.

“He’s just a player,” March said about Lofton. “Whatever his role is, he just does it. He plays through contact better than any player in this league. He can just score the ball.”

After a 32-32 first quarter tie, the Hustle recovered from trailing in the second quarter for a seven-point halftime lead at 72-65.

Santa Cruz shaved a point off that lead after three quarters at 109-103 going into the final quarter edge, but the Hustle kept a Santa Cruz comeback from happening for the nine-point victory.

Since the regular season began at the end of December with a two-game sweep of the South Bay Lakers, Memphis has been nearly perfect, only dropping a 110-107 decision to the Iowa Wolves on Sunday, Jan. 15 at the end of a four-game road trip.

The Hustle played a nine-man rotation but had six players not step on the floor Tuesday night. March said that was to have them ready for Wednesday’s 7 p.m. rematch at the Landers Center.

“The guys that didn’t play tonight are going to be asked to step in and play tomorrow,” March said. “I guarantee you they’ll do their job. It’s just what we’re about and the culture the Grizzlies have built.”

Speaking of conference-leading Stockton, the Hustle will follow Wednesday’s home game with Santa Cruz by heading to California to face the Kings in a two-game set Jan. 26 and 28.

HUSTLE NOTES: Tuesday’s game against the Warriors brought two familiar basketball faces back to the Mid-South. Dusty Hannahs, the sharpshooting guard who played in the Hustle/Grizzlies organization for two seasons returned as a member of the Warriors. Hannahs also played for the Warriors during the 2020-21 season but last year played in 23 games with the Adelaide 36ers of the Australian National Basketball League.

Also on the floor for the Warriors was former University of Memphis player Lester Quinones in his first professional season. Quinones played for the Warriors this past summer in the NBA Summer League. He averaged 10.1 points and 4.3 rebounds a game in 87 games and 81 starts for the Tigers.

Both Hannahs and Quinones started for Santa Cruz in Tuesday’s game. Quinones finished with 20 points for the Warriors while Hannahs was held to nine.