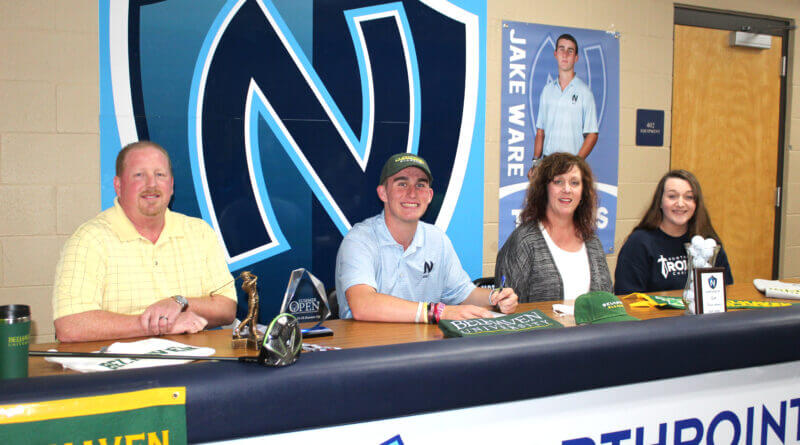 Northpoint senior golfer Jake Ware has a nickname. He’s called the Bullet because of the long distance that he can hit a golf ball off a tee.

“He used to do this thing when he was a kid that he’d hit one really far and then act like he was shooting something so I just called him ‘The Bullet,’” said his personal golf coach Adam Payne. “What Jake does that’s rare is how far he can hit it. He just has to continue to learn to manage how far he hits it because it’s not normal how far he hits it.”

Ware now will have the opportunity to shoot down low scores on the golf course as a member of the Belhaven University golf team, having signed a scholarship offer to the school on Wednesday, March 31.

“I’m going to play golf and learn and get a better education,” Ware said Wednesday. “ I’m going to study Leadership and coaching. I want to become a golf pro.”

Ware already has had a good career playing golf, having started to play at age six. He earned his first athletic letter in golf at Northpoint in eighth grade.

He quickly developed the ability to outdrive other players off the tee. “My driver is the best part of my game. I can hold my own,” Ware said.

Everyone who has worked with Ware through the years all said that his willingness to work on his game is another positive.

“The more practice I get in the better I get. I love the competition,” Ware said.

“He just works extremely hard and has a bunch of talent,” said Payne. “I think he’ll do fabulous the next four years in college.”

“He practices hard, works hard, and can hit the ball a long ways,” added Northpoint coach Fred Sheron. “I think he’s going to do very well at Belhaven.  I think he’ll be a good asset for their team.”

While Ware has developed a friendship with his future golf coach in Tyler Freeman, who is in his fourth season with the Blazers, Sheron said there were other schools that showed interest.

“He visited several schools, including Williams Baptist University (Arkansas),” said Sheron. “Blue Mountain College offered him, but they’ve got a program down there (at Belhaven) that’ll help him out a lot, and I think he really liked the coach. It was kind of split between Williams Baptist and Belhaven.”

Ware doesn’t put the clubs away when the high school season is over, it’s only just the beginning of his golf year. He has competed in several summer tournaments, including U.S. Junior Golf Tour events, the Mississippi Golf Association, and what’s called the Sneds Tour, named after PGA golfer Brandt Snedeker.

In four Sneds Tour events last year, Ware finished in the top 10 in all of them, including shooting a 77 at Cherokee Valley to finish in fourth place.

With the Trojans, Ware and fellow senior Luke Murphy are expected to be the anchors of the team.

Payne thinks Ware can find good success on the course at Belhaven.

“He definitely is a competitor who has the game to play at every level,” Payne said. “He just has to continue to focus and fine-tune it, because at the next level it’s about fine-tuning and eliminating even the smallest of mistakes.”