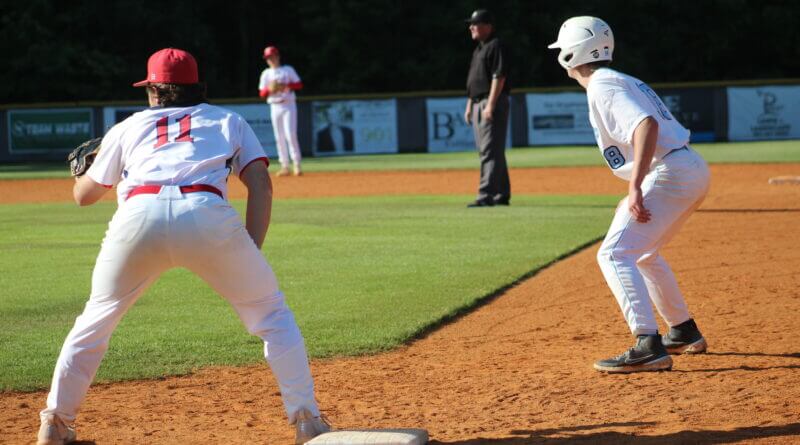 The now 30-6 Trojans had hoped to reach next week’s playoffs with a regional championship trophy, but the Rebels chose not to allow that to happen.

Northpoint won 5-4 in the 4 p.m. game Wednesday at St. George’s Independent School in Collierville, Tennessee to force a deciding second game for the crown.

In that final contest, the Rebels leaped out to a 6-1 lead after two innings, but had to hold off a last-ditch rally by the Trojans in the seventh inning to come away with a 6-5 victory and the West Region championship.

Both games were played Wednesday after rain forced postponement of the first championship round contest from its original Tuesday night schedule.

Besides determining the regional title, the games Wednesday decided the top-two seeds for next week’s next round of the playoffs.

Northpoint, as number two seed, is paired against the winner of this weekend’s Knoxville Webb-Clarksville Academy contest and will host the next round next week.  The TSSAA bracket at this time lists the Trojans playing next on Wednesday, May 19.

Here’s a recap of both Wednesday games for the Trojans in the West Region final round.

Northpoint scored single runs in each of the first two innings and added two more in the fifth for a 4-0 lead before Tipton-Rosemark answered with two runs of their own in the home half of the inning.

What turned out to be the deciding run in the game happened in the top of the seventh when Northpoint’s Hudson Brown crushed a homer over the centerfield wall to give the Trojans a 5-2 lead going into TRA’s final at bat.

That run would be extra important when the Rebels returned to the plate and scored twice in the bottom of the seventh, but couldn’t plate the tying run before Noah Roland struck out to end the game.

Anthony Zarlingo scored twice and had two hits in the victory. Brown drove in two runs, including one from his solo homer in the seventh.

Of Northpoint’s seven hits in the win, three went for extra bases. James Smith doubled along with Brown’s homer and a double from Zarlingo.

Smith was credited with the mound victory, striking out seven and allowing seven walks in 4.1 innings. He allowed one hit and two earned runs.

Jay Ferguson and JB Williams finished up on the mound for Northpoint, with Williams earning the save for his two-thirds innings of work.

“JB Williams coming in and shutting the door for us was just huge,” said Northpoint coach Stephen Kirkpatrick.

In all, Northpoint pitchers struck out 10 TRA batters in the victory.  Patrick Green took the loss for TRA.

In the winner-take-all finale to the tournament, it was TRA that jumped on JB Williams’ pitching in the first two innings to take a 6-1 lead after two innings.

Williams, who had just saved the first game of the “instant” doubleheader, was rocked for five hits and six runs (five earned) in 1.2 innings on the mound.

“He came in and did an amazing job.” said Kirkpatrick. “He kept it close and gave us a chance to win, but it just wasn’t in the cards.”

However, Northpoint couldn’t muster much offense of their own, as winning pitcher and tournament MVP Noah Roland held the Trojans’ hitters to just two hits before the bottom of the final inning.

With two out, trailing 6-2 and with the bases loaded after a walk and a pair of singles, Hudson Brown singled to left to score Rob Hayes and Anthony Zarlingo to get within 6-4.

Mcnatt then helped his own cause with a double to right field that scored James Smith and sent Brown to third.

However, that’s where they were stranded as Jay Ferguson was called out on strikes to wrap up the contest and the tournament for TRA.

Mcnatt not only pitched well in relief, but he led the offense in the second game, going 3-for-4, including a double, and with a pair of RBIs, as Northpoint finished the game with seven hits.

“We’re not leaving the field here happy, but there’s a lot to be proud of,” said Kirkpatrick. “We’ve played seven games in the last seven days and the guys continued to fight.”

Trojans named to all-tournament team: During the award ceremony following the game, all-tournament selections for the two teams were named. From Northpoint, the four players selected were Anthony Zarlingo, Hudson Brown, Jack Staples, and Garrett Waller.