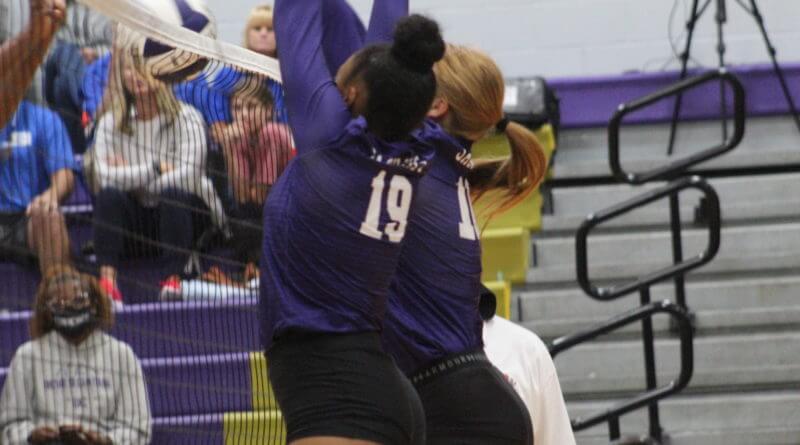 A busy and important week of volleyball for the DeSoto Central Lady Jags began Monday night with a 3-0 home victory over the visiting Bartlett, Tenn. Panthers in the DeSoto Central gymnasium. Scores of the match were 25-18, 25-16, and 25-18.

The win was played ahead of an important MHSAA 6A division match Wednesday night against Lewisburg in the DC gym, a match that was postponed after the Lewisburg team was faced with COVID-19 concerns.

Monday night, DeSoto Central got off to a slow start as Bartlett took a 5-3 lead in the set and also led 7-5, before the Lady Jags rattled off three straight points to force a Panther timeout.

DeSoto Central found their rhythm a bit to take a 15-10 lead but Bartlett came back to get within 16-15 Lady Jags.

“I think we started out really slow and really flat in the first set and took some time to get some momentum and some time to figure out what their defense looked like and where we were able to hit balls,” said DeSoto Central coach Margaret Falatko. “Then, for the most part we were able to execute.”

The home team again recovered and would net nine of the final 12 points for the set win, finished off by a Megan Harris service ace.

In the second set, DeSoto Central started off strong this time with a 6-0 lead, which forced Bartlett to call another timeout, one that the Panthers came out of to outscore the Lady Jags 5-2 to come within 8-5 in the set.

The challenge was thwarted by DeSoto Central however, who fashioned a 10-6 lead in the set and added five of the next eight points to make the set score 15-9. Another five out of six points increased the margin to 20-10, followed by a Bartlett service error to get the Lady Jags within 23-14 and eventually taking the set 25-16.

The final set started challenging as DeSoto Central held a 5-3 that Bartlett quickly tied at 5-5. However the Lady Jags would then reel off five straight points for a 10-5 lead, later 15-10 and 20-16. A wide service error put DeSoto Central within striking distance of the match at 23-18, followed by successive shots down the line followed by a put away, both from Kennedy Smith to put away the Panthers 25-18 in the set and completing the 3-0 sweep.

SPORTS ETC.: Wednesday’s volleyball match with Lewisburg at DeSoto Central will have tickets limited to a total of 275 spectators. A website was set up to purchase tickets online. CLICK HERE to reach the link for advanced tickets.

At the Saltillo Cross Country Invitational meet held Saturday, the Hernando boys finished eighth as a team with 249 points. Southaven finished 12th (347), Center Hill was 13th (372) and Lewisburg was 17th (484) as the DeSoto County schools that participated in the meet. Bartlett, Tenn. won the team title with 30 points.

Freshman Riley Jackson led Hernando to a second-place team finish at the Saltillo meet. Jackson was fourth overall with a time of 19:38.30. The Lady Tigers scored 79 points to host Saltillo’s 34 points in winning the team championship.

Other DeSoto County schools competing were Lewisburg, which finished ninth with 319 points, and Center Hill, which took 11th with 330 points.

Southaven’s Jordyn Petty was the lone runner from her school and she took 36th place in 22:12.50.