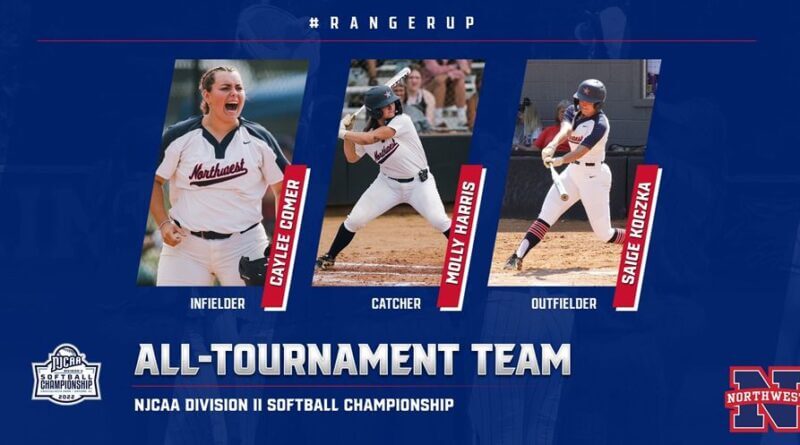 After a deep run that left Northwest as one of the final four teams left in the NJCAA Division II Softball Championship tournament, three Ranger sophomores have been recognized as part of the all-tournament team.

Infielder Caylee Comer, catcher Molly Harris and outfielder Saige Koczka earned all-tournament recognition, as announced by the NJCAA on Sunday afternoon. Out of 16 teams in the tournament field, the trio were among just 13 players selected for the postseason honor.

Comer was one of the most productive batters during the Rangers’ national tournament run, finishing 9-for-17 at the plate for a .529 batting average. The Brighton, Tenn. native and Mississippi College signee totaled three doubles with 11 runs batted in, including a home run against Kansas City (Kan.) that helped the Rangers take a 10-run lead in an elimination contest.

Harris, the team’s veteran catcher, caught fire at just the right time during the Rangers’ postseason journey. The Senatobia native went 12-for-21 at the plate, batting .571 with three homers and 10 runs batted in through five games in the national tournament. Harris’ most notable performance came in an elimination battle against Region 23 foe LSU Eunice, where she finished 3-for-5 at the plate with two home runs and six RBIs in a 12-2 victory against the Lady Bengals, while also throwing out two runners on stolen base attempts.

For the season, Harris finished with a .311 batting average coupled with six doubles, nine home runs and 45 runs batted in. The William Carey University signee also capped off her Northwest career with a .933 fielding percentage and 258 putouts, including eight runners caught stealing.

In a fitting end to a historic Northwest career, Koczka went out in style for the Rangers, finishing 13-of-19 at the plate for a .684 batting average in the final five games. Though the Southaven native didn’t get any home runs, she tallied three doubles and four runs batted in, while also accounting for at least one base hit in every national tournament matchup.

Koczka’s strongest tournament performance came in the 12-2 victory against LSU Eunice, where she went 4-for-4 with a double. The Memphis commit was also credited with a pair of RBIs in the Rangers’ 11-0 shutout of Kansas City (Kan.) and concluded her sophomore campaign with a team-best .433 batting average, 15 doubles, three triples, 12 home runs, 55 runs batted in and a .766 slugging percentage.

CLICK HERE for the entire list of the all-tournament awards from the NJCAA Division II national softball tournament.