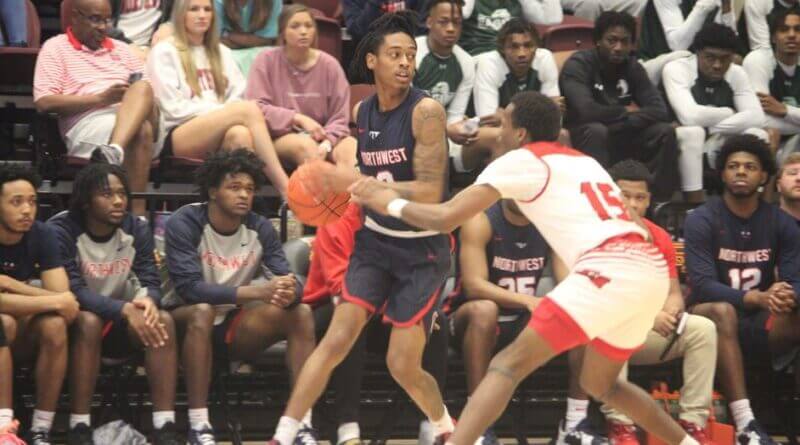 Photo: James Richards III finished with 13 points off the bench, despite a 69-55 Northwest loss in Tuesday’s first round of the MACCC Tournament men’s bracket. (Credit: Brian Lentz/NWCCRangers.com)

Although Northwest Mississippi Community College was able to recover from a sizable deficit in the first half, even a brief second half lead wasn’t enough to cool off the hot-handed East Mississippi Lions on Tuesday afternoon, as the Rangers were eliminated from the MACCC Tournament in Poplarville with a 69-55 loss.

Northwest fell to 17-7 on the season with the loss, while the Lions improved to 18-6 overall. The two teams split with each other during the regular season.

East Mississippi wasted no time building a big lead early, going up 10-0 on the Rangers within the first five minutes of the contest. James Richards III finally got Northwest on the board with a layup at the 12:46 mark, but the Lions would push their lead to 13 points with seven minutes remaining in the opening half.

Richards’ three-pointer at the 6:59 mark helped spark a 19-7 run for the Rangers over the final stretch of the first half, allowing Northwest to go into the locker room with the momentum and a one point deficit, 28-27.

At first, Northwest looked like the stronger team early in the second half, as the Rangers pushed ahead by six points roughly three minutes in. However, a timeout from East Mississippi helped the Lions emerge with a 19-2 run that spanned nearly eight minutes, sending Northwest back into a double-digit deficit.

Although the Rangers were briefly able to pull back under 10 with less than four minutes to go, a series of baskets from Jakorie Smith helped the Lions back to a double-digit advantage the rest of the way, ending a brief tournament stay for Northwest.

Joseph Cooper led the Rangers in scoring with 17 points and four assists, while Richards tallied 13 points off the bench. Isaiah Gaines and Zandon Haralson each finished with 10 points, with Gaines also adding nine boards.

Next up for Northwest will be the NJCAA Region 23 Playoffs, but the field and opponents still have yet to be determined. Stay tuned to nwccrangers.com for updates regarding the Rangers’ next postseason opponent.