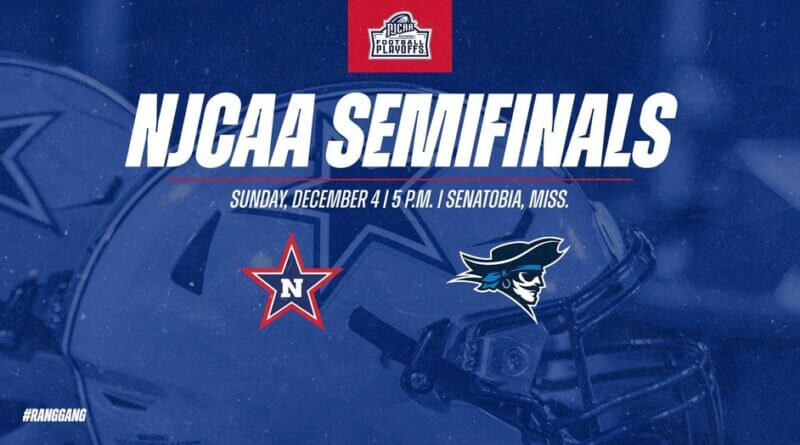 For the second consecutive season, the Northwest Rangers will make a return to the NJCAA Division I Football Playoffs.

Northwest, which checked in at No. 2 in Monday’s final NJCAA rankings, will host third-ranked Iowa Western on Sunday, December 4. Kickoff is scheduled for 5 P.M. from Ranger Stadium at Bobby Franklin Field, with live coverage provided by the NJCAA on ESPN+.

Tickets will be available to purchase in advance for $15, plus taxes and fees, and at the gate for $18. To purchase tickets, click here.

Northwest started the season ranked No. 4 in the preseason NJCAA polls and remained in the top five for the entirety of the season. The Rangers ran the table through the regular season, finishing 9-0 and capturing the MACCC North Division title for the fourth time in the last six seasons. Northwest then knocked off Jones College in the MACCC Semifinals, before finishing the season with an 11-1 record after a loss to East Mississippi in the MACCC title game, only the first loss of the season for the Rangers.

Despite the loss in the conference title game, the Rangers remained at No. 2 in each of the final two NJCAA rankings.

Northwest is led by a balanced offense and a potent defense, and both units have guided the Rangers to wins throughout the seasons. Offensively, quarterback Ren Hefley ranks second in the nation with 2,240 passing yards, trailing only Mississippi Gulf Coast quarterback Pat McQuaide. The Little Rock native is averaging 203.6 passing yards per game, fourth in the nation, and has completed 189 of his 308 pass attempts, good for a 61.4 completion percentage that ranks eighth among NJCAA quarterbacks.

Additionally, Hefley’s 24 passing touchdowns are tied with McQuaide for the most in the nation. His top targets are a pair of 600-yard receivers, D.T. Sheffield and Jaycob Horn. Recently named MACCC North Division Offensive Player of the Year, Sheffield has 677 yards and 11 touchdowns on 53 receptions, leading the nation in receiving touchdowns and ranking seventh in the nation in yards. To his credit, Horn has reeled in 43 receptions for 602 yards and four scores.

On the ground, Jamarien Bracey and Cayden Betts have carried the load well, with both players rushing for over 600 yards. Bracey has 156 carries for 727 yards and 10 touchdowns, ranking fifth in the nation in touchdowns and eighth in total rushing yards, while Betts’ 649 rushing yards rank 12th among NJCAA running backs.

Defensively, the Rangers are stacked from top to bottom, with countless players earning four-year offers. Linebacker Sam Brumfield leads the charge with 102 total tackles on the season, the third-most by any player in the country. Brumfield is also the team’s first player with 100 tackles since the duo of Terry Caldwell (122) and Malik Hawkins (106) in 2014.

Brumfield is just the tip of the iceberg for the Northwest defense, though. Defensive back Rontavious “Dude” Person has racked up 82 tackles on the year with a team-high nine pass breakups, along with 7.5 tackles-for-loss and two sacks. His counterpart Byron “Tank” Pearson is equally effective, posting eight pass breakups and six interceptions. Defensive back Jaylen Powell has also quietly raked in 58 total tackles, good for third on the team, while fellow defensive back B.J. Washington has emerged over the second half of the season with five pass breakups, three interceptions and 44 total tackles.

Northwest is also stacked on the defensive line, led by Jykeveous Hibbler, Omar Pew and Quinzavious Warren. Hibbler and Pew lead the team in tackles-for-loss with 14.5 and 11.5, respectively, combining for 115 yards lost. Hibbler’s nine sacks also lead the team, with Pew’s 4.5 sacks not far behind, ranking third only behind Brumfield. Additionally, Kiyon Williams has played a vital role in adding pressure to opposing offenses, leading the Rangers with eight quarterback hurries.

On special teams, the Rangers are led by punter Shade Foster and kicker Eli Hamlin. Foster has racked up 1,415 punt yards with six of his punts ranging over 50 yards and 14 landing inside the 20-yard line. Hamlin has converted eight of his 14 field goal attempts and 45 of his 50 extra-point attempts. On punt returns, Sheffield once again reigns supreme, racking up 226 punt return yards and a touchdown on 20 attempts, earning MACCC North Division Special Teams Player of the Year accolades as well.

Iowa Western (8-2) will also be making their second consecutive playoff appearance after finishing as the runners-up to New Mexico Military Institute in last season’s NJCAA Championship game. The Reivers’ offense is guided by quarterback Aiden Niedens, who has passed for 1,073 yards and seven touchdowns, while completing 88 of his 161 pass attempts.

On the ground, the Reivers are led by tailback Bryant Williams, who has rushed for 605 yards and four touchdowns on 144 carries. James Graham also leads Iowa Western in rushing touchdowns (8), while totaling 253 yards on 332 carries. Jaden Koger rounds out the Reivers’ rushing attack with 366 yards of his own.

Collectively, Iowa Western ranks fifth in the nation in total rushing yards (1,940), while Northwest tops the NJCAA with 2,070 yards.

Through the air, the Reivers are led by L.J. Fitzpatrick and his 374 yards on 20 catches. Three other receivers have collected 200 yards or more, led by 277 yards from Micah Davis and 245 yards from Aisea Toki.

One of the biggest strengths for Iowa Western comes on defense, where the Reivers have limited their opponents to 179.9 yards per game and an average of 11.5 points allowed. Rashion Hodge leads the Reivers with 60 total tackles and a team-leading three forced fumbles, while Jackson Filer’s 26 tackles-for-loss and 14.5 sacks are team highs in both categories. Dylan Reyes and JoJo Johnson have also combined for seven interceptions on the season.

Though paths haven’t crossed often for these teams, both Northwest and Iowa Western have played once before. That meeting came in the 2017 Graphic Edge Bowl in Cedar Falls, Iowa, where the Reivers rallied from a 10-0 deficit to defeat the Rangers, 36-19.

The winner of this semifinal contest will advance to the 2022 NJCAA Division I Football Championship against the winner of the other semifinal contest between KJCCC foes Hutchinson and Coffeyville. The game is scheduled for Wednesday, December 14 and will take place at War Memorial Stadium in Little Rock at 8 P.M. Central on ESPNU.