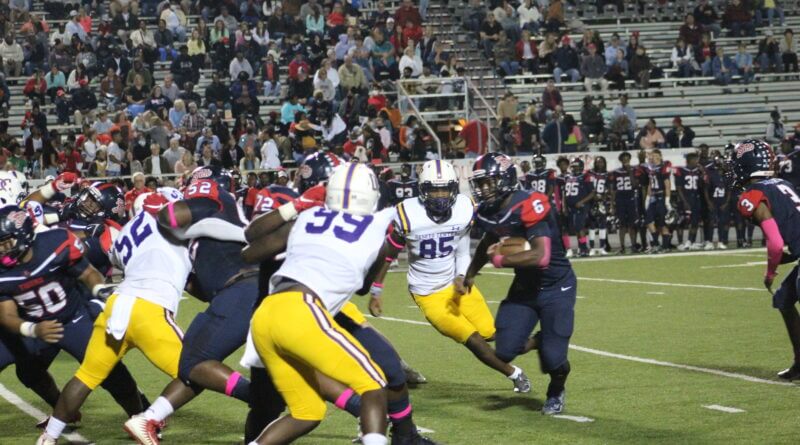 Marquis Fields scored the only touchdown for DeSoto Central as South Panola defeated the Jaguars 35-6 Friday night to become the only unbeaten team in Region 1-6A. DeSoto Central fell to 5-4 overall and 4-1 in the region and are tied with Southaven for second place.

Fields’ one-yard blast with 44 seconds left in the first half got DeSoto Central within 14-6 South Panola and came after Taurean Davis intercepted a Tigers’ pass with 4:21 remaining.

D’Maurian Perteet scored two first-half touchdowns, one from 42 yards out in the first quarter and again from one yard away in the second quarter, to stake South Panola to an early lead.

Defenses stiffened in the third quarter with no scoring and DeSoto Central appeared to have a chance to get back into the contest until two successive pass interceptions for touchdowns in the early part of the fourth quarter, part of a 21-point final 12 minutes of the game for the Tigers.

Marcus House got the first “pick-six” of about 30 yards with 10:54 left and Kalik Boothe snagged the next one for about the same distance about a minute later.

“At 14-6, if we make a couple of plays, it’s a different game,” DeSoto Central coach Shelby Ford said. “They made the plays, we didn’t.”

DeSoto Central’s final big scoring chance was stopped on downs at the South Panola 12-yard line with 6:28 remaining and was followed by Da marion Shaw’s three-yard touchdown score with about three minutes left in the contest.

“I told our guys that 4-0 versus 4-0 is going to be intense,” Ford said. “Our defense played really well but our offense struggled.”