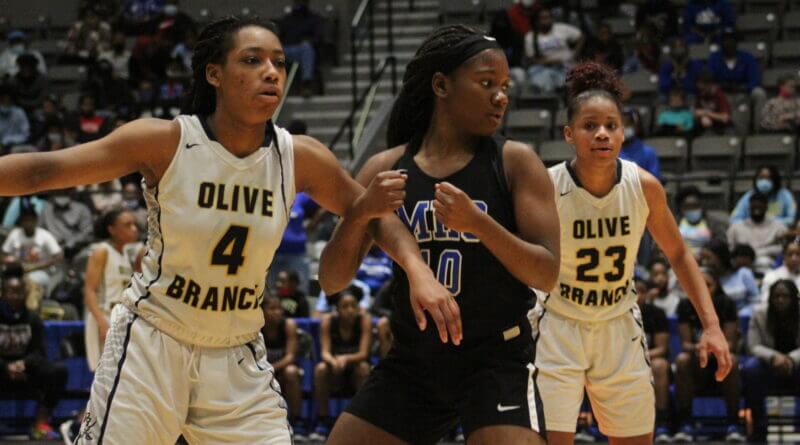 The Olive Branch Lady Quistors girls basketball team is back in what has become a familiar place the past few years; the MHSAA 6A state championship game.

Olive Branch defeated Meridian 73-53 in the semifinals Wednesday afternoon to advance to the state finals on Saturday, March 6, starting at 5 p.m.

The Lady Quistors will be gunning for their third straight state championship, last year in 6A and two years ago as a 5A school.

Meridian entered the game hoping to avenge a regular season loss at Olive Branch, 66-55, a loss which pushed the Lady Wildcats out of the number one ranking in 6A girls basketball and put the Lady Quistors in the top spot in the state.

“I think it helped both sides,” Thompson said. “It gave both teams the opportunity to play each other and get film on each other. My kids just wanted it a little bit more.”

The Lady Wildcats took control early in the game with a 6-0 run to start and led 19-15 after one quarter.

Alianna Patton paced Meridian’s attack in the quarter with seven points, including a three-pointer. Rhema Pegues dominated the Lady Quistor offense with 10 of her team’s 15 points in the period.

“She has all of the ability in the world,” Thompson said. “She really stepped up and did a great job.”

Olive Branch chipped away at the Meridian lead in the second quarter and finally led the game, taking a 31-30 advantage into the break at halftime.

Charity Hinton, Meridian’s deadly outside shooter, hit a pair of long-range three-pointers in the quarter, part of her nine first-half points.

Meanwhile, Addison Howell warmed up and hit for eight points for Olive Branch, which included a perfect 4-for-4 at the free throw line.  Brynea Eason added seven more for the Lady Quistors in the second quarter and finished the half with eight points.

Olive Branch started to pull away in the third quarter, as the Lady Quistors struck for 25 points in the eight minutes after halftime while the Lady Wildcats scored 18. Pegues led a balanced scoring attack for Olive Branch with eight points. Hinton added eight points in the quarter for Meridian, which trailed Olive Branch 58-48 heading into the final quarter of play.

The Lady Quistors finished off Meridian in the fourth quarter as the Lady Wildcats were held to just five points, a basket by Debreasha Powe and a three-pointer from Jamiya King. The Lady Quistors got eight from Howell and six from Pegues in the final eight minutes of the game.

“We did the things we’ve been working on and we competed from start to finish,” Thompson said. “They’re playing smart and playing together. Everyone plays together and loves each other.”

Pegues finished with 24 points for Olive Branch and Howell scored 22 for the Lady Quistors. Meridian got 17 from Hinton and Patton finished with 15 more.

4 thoughts on “Olive Branch girls advance to another state final”