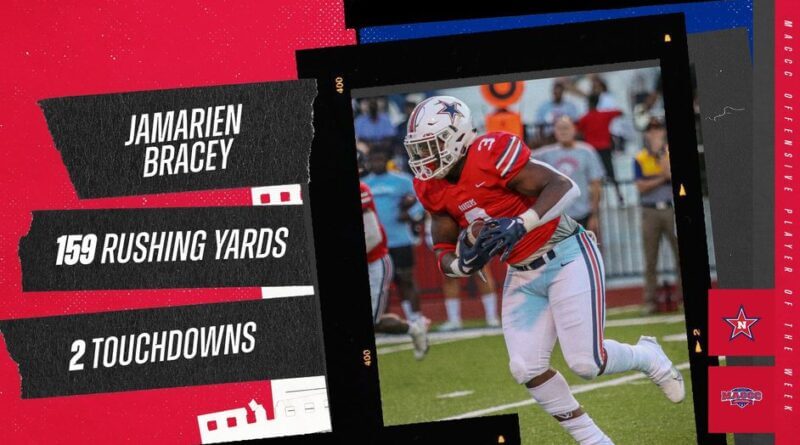 After tallying a career-best 159 rushing yards in last week’s victory at No. 8 East Mississippi, Northwest sophomore tailback Jamarien Bracey was named the MACCC Offensive Player of the Week on Tuesday morning.

Bracey led a dominating effort from the Northwest backfield, which finished with 301 total yards in the Rangers’ 38-21 victory at EMCC. Bracey accounted for most of his yardage in the first half, helping his team to a halftime lead.

Northwest started the game with two possessions that were halted inside the Lions’ 30-yard line. Bracey finally got the Rangers on the board early in the second quarter and added another touchdown early in the fourth, widening the gap to a two-score lead for Northwest.

For the season, the Bryant, Ark. native has a commanding team lead of 524 rushing yards and six touchdowns. Through five games, Bracey is averaging 104.8 rushing yards per game.

Bracey is the first offensive player from Northwest to receive POTW accolades. Earlier this season, teammate Jykeveous Hibbler was awarded Defensive Player of the Week honors by both the MACCC and NJCAA.

Northwest (5-0, 2-0 MACCC North) will return to Bobby Franklin Field on Thursday evening against Mississippi Delta. Kickoff is slated for 7 P.M., with pregame coverage beginning at 6:30 P.M. on Ranger TV.