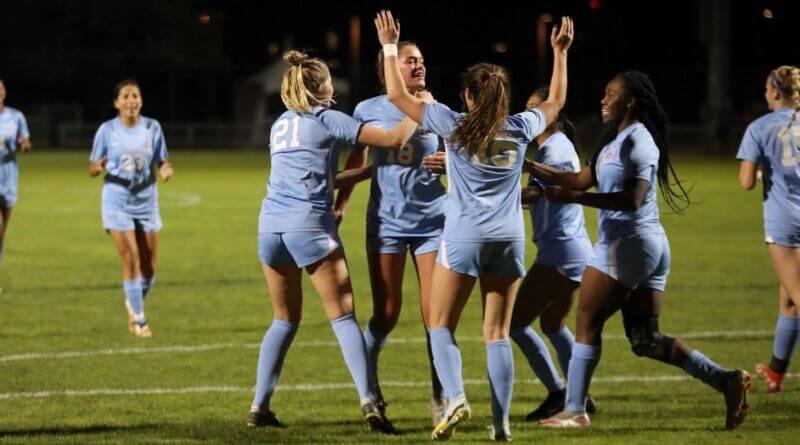 Two goals from freshman Dani Rodriguez in the second half helped fourth-seeded Northwest to a 4-1 victory in Monday evening’s NJCAA National Tournament opener against No. 12 Northeast (Neb.).

One of Rodriguez’ goals came with less than five minutes on the clock, sealing the win and improving the Lady Rangers to a 14-1-3 overall record. The Hobbs, New Mexico native was also responsible for the first goal of the second half, which helped Northwest take a 2-0 lead at that point.

Both teams battled aggressively to open the match, with Addy McCann being tested on a couple close shots. Northwest would do the same on the other end, having a couple great looks swatted away by Northeast’s Carolin Stahlmann.

The scoreless draw was finally broken in the 33rd minute of the match, when Jennifer Enriquez scored off an assist from Melinda Hernandez. Northwest then had to fend off an aggressive effort from the Lady Hawks in order to preserve the 1-0 lead at halftime.

Northwest opened the second half with momentum and in the 59th minute, the Lady Rangers struck again, with Rodriguez’ goal off a pass from Evie Crawford.

However, Northeast had no intentions of going quietly into the night and the Lady Hawks proved that just moments later, scoring on a play originally called offsides by the line judge. After a discussion with the center official, the goal was awarded to Mackenzee Stokes and Northwest, cutting the Lady Rangers’ lead down to 2-1.

Despite the call, Northwest pressed on with its attack. Just a few minutes after the goal from Stokes, the Lady Rangers struck again off a corner kick, as Jada Jelks put one past Stahlmann to stretch the lead to 3-1.

With the momentum clearly in favor of the Lady Rangers, Northwest locked down on defense, preventing any further opportunities from the Lady Hawks. In the 85th minute, Rodriguez’ second goal put the match away for good. Jadyn Duran also provided the assist for the final goal.

Northwest was the aggressor on offense for most of the evening, firing off 25 total shots compared to just nine from Northeast. The Lady Rangers also finished with a 12-7 advantage in shots on-goal.

Enriquez took a whopping eight shots in the contest, with three of her attempts coming on-goal. Hernandez also took four, followed by three from Crawford.

McCann finished with eight saves in the net for Northwest, improving her season total to 76 and her season record to 13-1-3. Amelia Anding also checked in for the final five minutes of play, but did not face a shot from Northeast.

Though the match was a little physical in the first half, Northwest was whistled for 12 fouls, with Northeast only being hit with five. Bre’Aunna Harps was also the recipient of the only yellow card, a call that came down in the 40th minute.

Northwest will now wait and face tournament host Pima on Wednesday evening at 6:30 P.M. Central. The Lady Aztecs (13-2-1) will first face Northeast at 6:30 Tuesday  evening as part of the second match of Pool D.

All matches can be seen on the NJCAA Network, with purchase options available here.