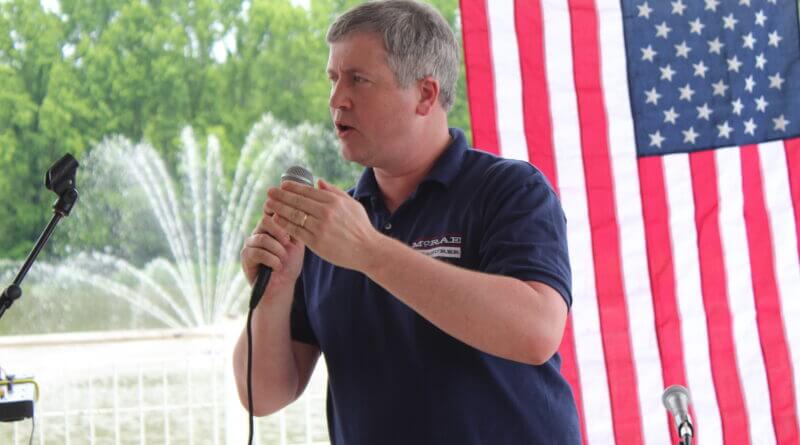 “Our job is to maximize financial returns for the more than 18,000 members of PERS,” wrote McRae. “I have grown deeply concerned that the actions of New York investment firms, however, are jeopardizing this system and failing to uphold their fiduciary responsibilities to us.”

ESG investing screens corporate actions as they relate to climate change policies, gender diversity, and more. While these strategies have lured the attention of liberal-leaning Wall Street powerhouses, ESG returns tend to be markedly lower than their conventional counterparts.

McRae noted that many New York City asset managers have begun to offer ESG options, but BlackRock, Inc., has adopted one of the most aggressive postures. As such, McRae’s letter also urges the PERS Board to “fully divest pension system funds from BlackRock, Inc.” He also encourages the Board to “formally prohibit the use of any consideration besides financial performance in its investment policy.”

A full copy of McRae’s letter can be found below.

Our job is to maximize financial returns for the more than 18,000 members of the Public Employees’ Retirement System (PERS). Each member is relying on the growth and sustainability of this system to support them in their golden years, but I have grown deeply concerned that the actions of New York investment firms are jeopardizing this system and failing to uphold their fiduciary responsibilities to us.

Over the last few years, “Environmental, Social, and Governance” (ESG) investment strategies have lured the attention of Wall Street powerhouses, not because of ESG funds’ profitability, however. In fact, studies show ESG returns are markedly lower than their conventional counterparts. Instead, ESG’s sole promise to shareholders is to screen corporate actions as they relate to factors unrelated to financial viability, such as a company’s environmental stewardship, diversity, inclusion, and more.

Many New York City asset managers have begun to offer ESG options, but BlackRock, Inc., has adopted one of the most aggressive postures, weaponizing their clout and acting as a loyal soldier for the ESG cause rather than those to which they have fiduciary responsibly.

Specifically, BlackRock has barred hundreds of individuals from joining corporate boards simply because of the candidate’s climate change views, thereby ensuring more and more companies are led by environmental activists instead of business managers. And when evaluating the companies themselves, BlackRock explained that climate change is “a defining factor in companies’ long-term prospects.”

This is troubling as we consider PERS for a handful of reasons:

1)     Whether you agree with BlackRock’s ESG objectives or not, the fact is that the standards are being applied subjectively, often according to perceived political ideology rather than hard facts. Consider this: One might think that Tesla, the world’s largest electric vehicle manufacturer, would earn a high ESG rating for its environmental stewardship. But no, it was kicked off the S&P ESG Index earlier this year.

Who remains? Left-leaning Apple and Nike (both of which have been accused of historic human rights violations that directly contradict the stated mission of ESG). Oil juggernaut Exxon also holds a spot on the ESG list, and investments into the globe’s largest polluter and human rights abuser, China, are still allowed.

As such, even if one assumes that today’s marketplace will reward companies that are good stewards of the environment and societal ambitions, ESG is a poor metric of success.

2)     Propped up by ideology rather than reality, the subjective standards applied through BlackRock’s support of ESG contribute to inflation and higher costs for working Mississippians. Today, the primary ESG target is American energy, specifically oil and coal, which are among the nation’s most affordable energy sources. As such, Tesla-driving, ultra-rich, New York City investors are siphoning funds away from the very industry that is needed to reduce gas prices for the average American. There should be no expectation that gas prices will sink if BlackRock is not held accountable for its ESG agenda.

BlackRock is actively pressuring companies to go further and reach net-zero greenhouse gas emissions, a proposal that would have a devastating impact on working Mississippians. This is what a net-zero pathway would mean: Electricity generation from coal and natural gas would decrease from 67 percent to 3 percent by 2050; a global carbon tax would be imposed; and the sale of internal combustion engines would cease by 2035.

If any one of these options became reality, Mississippians would be paying even more for gas, more to heat and cool their homes, more in taxes, and more at grocery and retail stores. As public servants, we must not be complicit in the destruction of family bottom lines – if for no other reason than because inflation weakens the economy and slows the pace of growth, further damaging the pension system’s long-term viability.

3)     Beyond the impact this will have on family budgets, BlackRock’s blind commitment to ESG will do generational harm to Mississippi’s economy and our leading job creators. The U.S. coal industry has largely been destroyed by a combination of overly-stringent federal regulations and capital starvation from ESG-aligned investment funds. Meanwhile, China and India are building new coal plants every day.

And ESG isn’t stopping at coal. When they come after the natural gas industry, how will that affect rig jobs in Mississippi? When they go after the agriculture industry over methane production, as they are beginning to do, what will happen to our beef, pork, and chicken producers? When Mississippi’s timber industry gets blacklisted, what will that mean for the thousands of Mississippi jobs it supports?

And will it stop at industry targets? Some say Mississippi’s conservative state laws could make the state itself a target, jeopardizing our credit rating and costing taxpayers millions.

Our state’s pension system cannot rely on an investment strategy that is designed to eliminate Mississippi jobs and industries.

4)     While ESG will damage many core Mississippi industries, BlackRock’s preoccupation with ESG scores will create bubbles in favored industries – and bubbles burst. As explained above, BlackRock has openly stated that climate change is “a defining factor in companies’ long-term prospects.” Here is what that means for investors, like PERS: The security of our assets is not based on a company’s viability or profitability, but instead on factors that have little to do with long-term growth. When legitimate concerns like balance sheets and income statements are pushed to the side in favor of unrelated ESG scores, investors are left exposed to risky investments. When the ESG bubble bursts, PERS members can’t be left holding the string.

5)     For these reasons and more, BlackRock is knowingly failing to uphold their fiduciary responsibility to PERS members by prioritizing ESG above all else. While almost no sector of the economy has shown brightly in 2022, ESG funds have been dimmer overall. According to analysis by wealth manager Detlif Glow, “Overall, ESG has underperformed by 250 basis points for the past five years. Another long-term study noted that ‘ESG funds appear to underperform financially relative to other funds within the same asset manager and year, and to charge higher fees.’ Furthermore, adopting ESG policies does not cause improved company financial performance. This means asset managers have no financial basis for pressuring companies to adopt ESG.” [emphasis added]

The decisions of this board must reflect the most financially sound decisions for our members. We have not been called here to promote a social or political agenda. We have, however, been asked to ensure thousands of people can retire with the resources they were promised. ESG fundamentally undermines our ability to complete the mission.

Regardless of your view on climate change, Mississippi’s pension system is the wrong place to experiment with environment, social, and governance strategies. Moreover, even if you were willing to experiment with these funds, early indications show ESG is failing the test. The policies ESG promotes tie directly to higher costs for consumers, a weaker Mississippi job market, increased inflation, and smaller investment returns – all while undermining the free market and our economic liberty. This is not a future we need to be tied to.

BlackRock manages around $10 trillion in assets. Outside of the federal government, almost no one has more financial power. But BlackRock is unelected, and thereby not directly accountable to the people of Mississippi. We, therefore, must act on behalf of the people, protecting their retirements, their jobs, and their bottom lines. With this in mind, I am today recommending the PERS Board fully divest pension system funds from BlackRock, Inc. Additionally, I urge this Board to formally prohibit the use of any consideration besides financial performance in its investment policy.