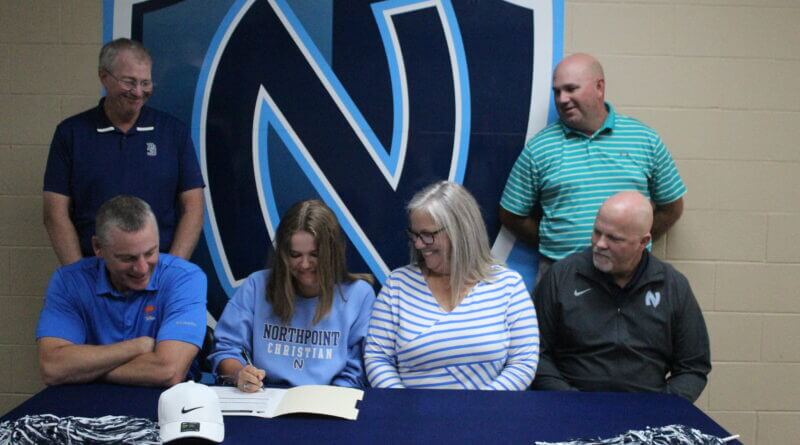 Northpoint Christian standout girls’ golfer Ella Cress will be taking her golf talent, and her clubs, to Dalton State College, an NAIA school in Dalton, Georgia. It is a program that has been one of the top women’s golf teams in the country.

Cress will join a program that is currently ranked second in the nation, according to the NAIA Women’s Golf Coaches Poll. The Roadrunners head coach Ben McGrew started the program in 2013 and was on hand Tuesday as Cress made her commitment to the program official.

This fall, Cress finished in a tie for third in the Tennessee Secondary Schools Athletic Association’s (TSSAA) Division II-A state tournament with a two-day total of 74-72=146.  She helped the Lady Trojans win three West Region championships and two state runner-up finishes. This fall, Cress was a region champion, shooting a 68 to get the win.

“We’re going to miss her presence here and what she brought to the team,” said Northpoint coach Brian Stephens.  “There’s just an amazing legacy of golf that she leaves, both individually and collectively as a team.”

Cress believes the connection with Dalton State began about three years ago.

“I was sending out emails to a lot of schools and I emailed him (McGrew),” Cress said about how she found out about Dalton State. “He answered and we just connected on social media and emails. I’ve met a couple of the players and I think he’s a really good coach.”

McGrew said he’s impressed with her play and thinks Cress can be a championship player at the school, agreeing that Ella’s short game is likely her best golf asset right now.

“I’ve been watching her for about three years now and I feel like she can come in and help us continue the success that we’ve had,” McGrew said. “We think she has a chance to come in and be an All-American for us and win conference championships.”