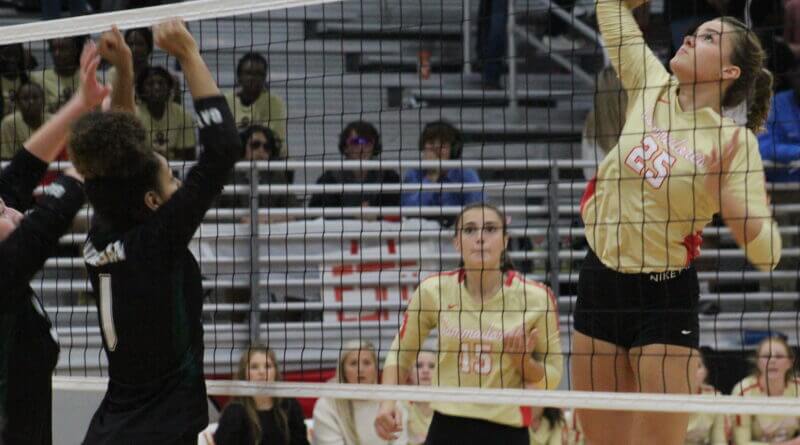 Kailey Gooch (25) of Lafayette looks to fire a kill attempt against a Lake Cormorant block during Tuesday’s North Half finals in Oxford. (Bob Bakken/DeSoto County Sports)

The Lady Commodores won the North Half title over defending champion Lake Cormorant in four sets Tuesday evening in Oxford.

“We knew tonight we would have to play really, really well at all times,” said Lake Cormorant coach Christina Morgan. “Lafayette was the better team tonight.”

The Lady Gators rallied from a 10-8 deficit in the first set to take a 14-11 lead and a Lady Commodore timeout. Lafayette recovered out of the timeout and had an 18-17 lead, but when Paige Griffin powered a shot off a Lafayette block, Lake Cormorant regained a 20-19 lead. Griffin later followed with a serve that glanced out of bounds off a Lafayette player and another volley that went out finished the set for the Lady Gators.

“I think we came out with a game plan of what to do and we executed really well in the first set,” Morgan said. “We were able to put a lot of pressure and keep them out of system so their big hitters weren’t swinging as well as they did later in the last two sets.”

The third set went to Lafayette from the start, as the Lady Commodores had a 5-1 lead after an ace from Mary Laurel Bumgardner and a 10-3 when Griffin’s volley went wide of the court.

It became 15-5 Lafayette as Jania Rose’s volley went out but after a side out, Rose came back to serve an ace and get Lake Cormorant within 15-7.

Lundyn Wilson fired a kill to get the Lady Gators within 18-13 but a Lafayette kill gave them a 20-14 lead. Five of the next six points went to Lafayette for the 25-15 third set victory.

In the deciding set, Lake Cormorant fired off seven of the first eight points for a 7-1 lead but a turning point came when London-Grace Daniels fired an ace for an 11-10 Lafayette lead. The Lady Dores claimed a 14-11 lead but Griffin again helped rally the Lady Gators to within 14-13.A kill from Presley Thomas grew the home team’s lead to 20-13 and five more points finished off the Lady Gators 25-13.

“I believe we grew as a team throughout the season,” Morgan said about the year. “This is one of the funnest groups of girls I’ve ever coached. I’m proud of them and to be one of the top four is something to be proud of.”

In a twist that other states do not do in volleyball, the Tennessee Final Four has a loser’s bracket that allows first-round losing teams the chance to come back through the bracket to the championship game.

It was the first trip to the state tournament Final Four since 2007 for Northpoint, then known as SBEC, lost to Harding Academy and St. George’s of Collierville.