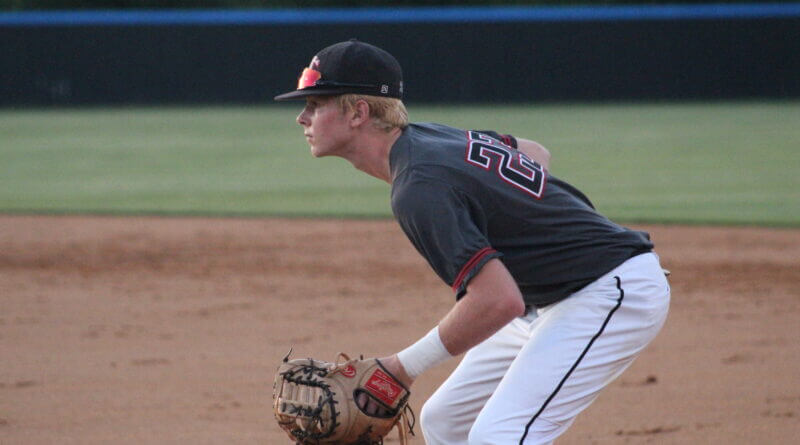 Center Hill moved a step closer to a MHSAA 5A North Half Championship baseball berth with a decisive 11-1 victory at Saltillo Thursday night. The Mustangs took a 1-0 lead in the best-of-three third-round series with the Tigers with game two set for Friday night at Center Hill. Game time is 7 p.m.

Saltillo also hurt themselves with five errors in the field.

Five Center Hill batters had multiple-hit efforts, led by Clark and Jake Scott with three hits each. Braxton Miller, Logan Esfeld, and Christo Peeks each had a pair of hits.  Peeks had a pair of doubles. Clark and Scott also doubled for the Mustangs.

Esfeld and Ayden Rodgers each scored three times in the victory. Scott drove in five of Center Hill’s five runs against the Tigers.

“Jake hadn’t really hit a lot all year and the last couple of weeks he really started swinging a good bat, so we let him start hitting,” said Cooley. “He really had some good at bats tonight, put some barrels on some baseballs, and he did a good job for us.”

Clark, in addition to allowing just five hits, struck out five and walked just one Saltillo hitter.  He fired 61.4 percent of his pitches for strikes.

“He’s been a bulldog all year for us,” Cooley said. “Any big game, no stage is too big for him. He comes out, competes, and performs every time.”

Thursday night, Center Hill scored twice in the first inning and added three more in the third inning for a 5-0 lead.

“Coming out in the first inning, the kids came out and really played hard,” Cooley said. “We jumped of them early and kept the pressure on them all night long.”

The Mustangs grew the lead to 6-0 in the fourth before Saltillo was able to score their only run of the game in the home half of the fourth.

Center Hill scored one more in the fifth and broke the game wide open in the seventh inning with four more runs and the final score.

For the Mustangs, success in the later weeks of the season and the playoffs has made some monumental struggles in the early part of the year mean little now that the games that really count are ahead.

At 11-19, Cooley believes the team that’s playing now is far from the group that started the year.

The struggles began with the start of the school year when Cooley was named new baseball coach. Several players expected to have a role on the roster left to go elsewhere.

“We had 4-5 starters transfer right after Christmas break,” Cooley said. “Our best arm (pitcher) also got hurt in the soccer playoffs, so it’s been tough for us all year.”

For that reason, followers of the Mustangs have seen or used on social media the hashtag #thosewhostayed, backing the players who have stuck it out for the entire year.

“It’s kind of been a theme for us, #thosewhostayed,” said Cooley. “We’re really trying to get the ones who want to be here and who want to play and compete. That’s no slight against the guys who left, because they’re all great ball players. At the end of the day, the ones in the dugout are the ones that matter.”

A Center Hill victory Friday puts the Mustangs into the North Half final against either Ridgeland or Lafayette (Oxford). The Commodores won the series opener Thursday night with a 10-1 victory over the Titans.

A loss would send the series back to Saltillo for a deciding game three Saturday, starting again at 7 p.m.

On Friday, for game two, a special public address announcer will be on hand for the Mustangs-Tigers contest. DeSoto County Sheriff’s Deputy Austin Eldridge, injured when assisting a driver along I-269 in early February, will be the announcer.

Eldridge was involved in broadcasting before starting his career in law enforcement. He has been continuing his physical therapy in his recovery from injuries, that included loss of a leg when he was struck by a passing motorist while helping the stranded driver fix a flat tire.

JAGS FACE ELIMINATION: At Tupelo, the Golden Wave put the DeSoto Central Jaguars on the brink of elimination after a 3-1 game on victory in their 6A third-round contest.

DeSoto Central hosts the Wave Friday at 7 p.m., needing to win the game to force an elimination game back in Tupelo on Saturday night.

The Jaguars opened the game Thursday with a run in the second inning, but Tupelo quickly answered in the home half of the inning to knot the contest up at 1-1. Tupelo would add single runs in the third and again in the fifth inning to close out a DeSoto Central team that has won the last two contested state championships, in 2018 and 2019. Coronavirus forced cancelation of the spring sports season in 2020.

DeSoto Central was held to just three hits by Tupelo pitcher Hunter Elliot. The Jaguars also committed three errors to hinder their effort in the field.

Meanwhile Brock Tapper was tagged with three runs, two of which were earned, in suffering the loss. Tapper pitched five innings, struck out seven and walked three.

Will Norris pitched one inning in relief and fanned a pair of Tupelo batters.