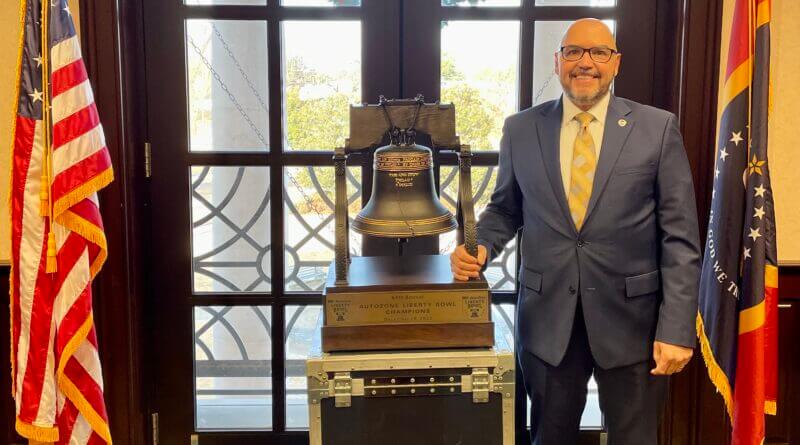 Bowl season again comes to the Mid-South Wednesday when the 64th AutoZone Liberty Bowl is held at Simmons Bank Liberty Stadium in Memphis. Kickoff is at 4:30 p.m. and the game receives national television coverage from ESPN.

Arkansas of the SEC meets Kansas of the Big 12 in Wednesday’s game. Both teams have 6-6 records entering the contest.

With water and weather concerns active leading up to the game, Simmons Bank Liberty Stadium General Manager Thomas Carrier Tuesday offered this information for fans coming to the game, stressing the plans that the game will go on.

“The City of Memphis and MLGW are working to ensure that the 2022 AutoZone Liberty Bowl Game will continue tomorrow despite water pressure issues in Simmons Bank Liberty Stadium,” Carrier said.

If you come to the game, expect the following:

The AutoZone Liberty Bowl Champions Trophy, which will go to the winning team, made a tour of some locations ahead of the game Tuesday, including a visit to Olive Branch City Hall to meet with Mayor Ken Adams.