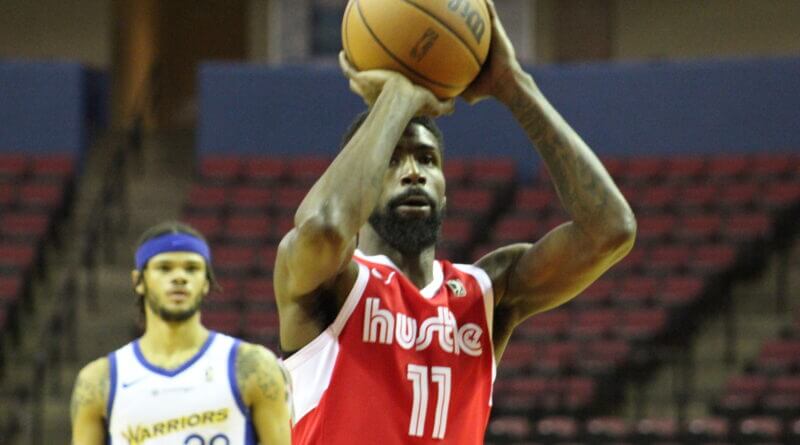 Photo: Shaq Buchanan (pictured from earlier this year) scored a career-high 33 points for the Hustle against the Skyforce on Sunday. (Bob Bakken/DeSoto County Sports)

The Memphis Hustle defeated the Sioux Falls Skyforce 107-99 to complete the two-game sweep at the Sanford Pentagon in Sioux Falls, South Dakota.

Martin Krampelj totaled 17 points, nine rebounds and three steals on 6-of-10 shooting for Sioux Falls. Javonte Smart tallied 17 points, four steals and two assists in his first regular season game but was limited to 1-of-8 from 3-point range. Micah Potter posted a double-double with 11 points and 12 rebounds.

Memphis trailed 93-87 with 5:02 to play before Terry led the Hustle on a 20-6 run to end the game. Terry scored 10 of his 20 points in the final 2:25 to close out the Skyforce. The Hustle put together their best offensive quarter in the fourth, shooting 55 percent from the field and 44 percent from 3-point range.

The Hustle outscored Sioux Falls 24-9 from 3-point range in the second half to complete a 13-point comeback, its largest this season. Memphis overcame double-digit leads in both wins at Sioux Falls.

Buchanan scored 20 of his 33 points in the first half, but Sioux Falls limited Memphis to 3-of-18 from 3-point range, taking a 51-46 advantage into the break.

Memphis continues its six-game road trip at Salt Lake City on Wednesday, Jan. 18, at 8 p.m. CT. Fans can catch the game on ESPN+.