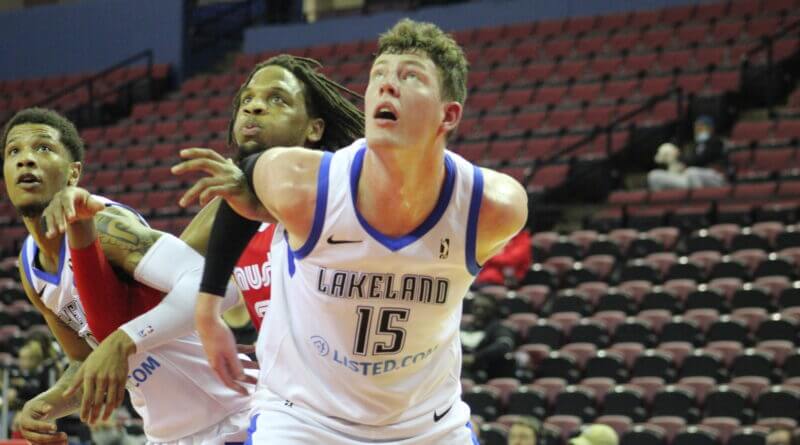 Freddie Gillespie of the Memphis Hustle battles two Lakeland Magic players for a rebound after a free throw in Sunday’s contest against the Lakeland Magic at the Landers Center. (Bob Bakken/DeSoto County Sports)

The Memphis Hustle found themselves in the doghouse from the opening tip on Hustle and Hounds Day at the Landers Center Sunday, Dec. 5 and they never could get out of it or catch a bone in a 119-100 loss to the defending NBA G League champion Lakeland Magic.

Fans were invited to bring their favorite pooch with them to the contest.

But, just seconds into the game, forward Freddie Gillespie was called for a defensive three-seconds technical foul and the Magic used that to blow out of the gates to a 6-0 lead before the Hustle could answer.

From there, Memphis never had the lead the entire game in their second straight loss to the Magic following Friday’s 118-97 defeat that opened the two-game Showcase Cup home series. The Hustle dropped to 4-4 in the Showcase Cup ahead of Tuesday, Dec. 7 and a visit from the unbeaten Rio Grande Valley Vipers.

The Hustle trailed 39-26 to the Magic after one quarter and likely would have been further behind were it not for the hot shooting of Shaq Buchanan. The returning rights Memphis player, who played college basketball at Murray State, contributed 15 of the Hustle’s 26 first-quarter points.

The Magic built their 13-point lead in the quarter as B.J. Johnson scored 10 of Lakeland’s 39 points.

The shooting struggles continued for the Hustle in the second quarter and Memphis ended up hitting on only 37.5 percent from the floor for the first 24 minutes of the contest. However, the Hustle were only outscored by a 26-24 margin in the quarter as Lakeland held a 65-50 halftime lead.

“We struggled making shots and our offense has to help our defense at some point in the game,” said Hustle coach Jason March. “When we struggle making shots, we’re just hurting ourselves.”

The Hustle did come out and played better in the third quarter, getting the game to within 69-66 at one point before the Magic pulled away again to claim an 87-77 advantage going into the final quarter of play.  Freddie Gillespie, in particular, broke out a bit and hit seven points in the frame to lead Memphis scoring as the Hustle actually outscored Lakeland 27-22 for the quarter coming out of halftime.

“We came out of halftime and the guys had their legs and got the wind back from the first half,” March explained. “Our first group went out and played, got stops, and were able to run and get out in transition.”

But the home team couldn’t complete the comeback, as the Magic regained control and put up 32 fourth-quarter points to the Hustle’s 23 in getting Lakeland’s fifth win in eight games of the season-opening Showcase Cup.

At one point in the final stanza Memphis had again crawled back within 95-87, but couldn’t pull any closer.

Memphis also was hampered Sunday with a short bench playing with only eight players. Two players were out with injuries and two others were away from the team as two-way players with the Grizzlies. Those two were forward Yves Pons and forward-center Killian Tillie. Reggie Hearn and Sean McDermott both sat out Sunday with ankle injuries.

After Buchanan’s 31 points to lead all scorers, Ahmad Caver found the range for 18 points, Freddie Gillespie scored 13 and Matt Hurt finished with 12. Johnson led six Magic players in scoring with 24 points Sunday afternoon, one game after scorching the Hustle for 40 points Friday night.

“I thought our effort was extremely better from the previous game from top to bottom,” said March. “Shaq (Buchanan) gave us everything he had and so did other guys. The ball just wasn’t going in for us.”

The Hustle (4-4) now host the unbeaten Vipers on Tuesday night, Dec. 7 at the Landers Center.

“We’ve got to come ready to go or it’s going to be a long couple of games against them, as well,” March said.

Tuesday’s game, followed by a rematch at home Thursday, Dec. 9, will be the Hustle’s final two games of the Showcase Cup series, where the winner of each regional pod and the next four teams by winning percentage then advance into the Showcase Cup playoffs.  They finish the Showcase Cup portion of the schedule with two games at Birmingham, Alabama.