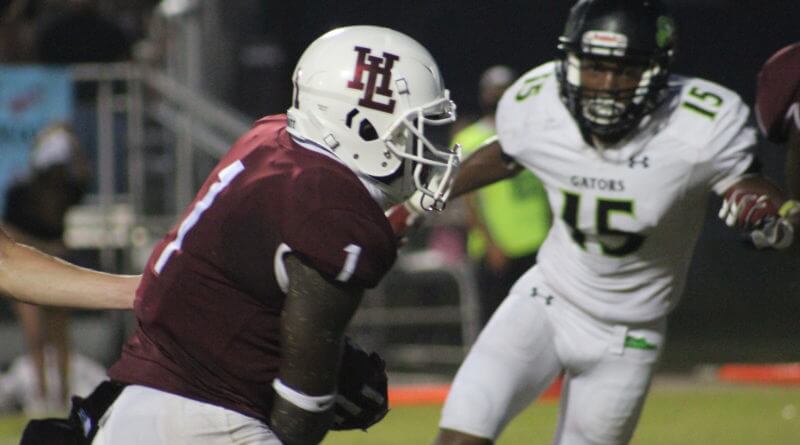 The Lake Bowl trophy will remain in the Swamp after the Lake Cormorant Gators traveled to Horn Lake and beat the Eagles 31-21 Friday night. It marks a successful defense of a traveling trophy started a few years ago to determine western DeSoto County football supremacy.

Lake Cormorant (2-0) opened the game with a 10-0 after one quarter when senior Kejuan Garner recovered a fumbled punt and went in for the touchdown with 9:52 left in the opening quarter. The Gators followed that with a 25-yard field goal to fashion the early lead.

Horn Lake (0-2) got on the scoreboard in the second quarter when junior quarterback Trint Condor found junior wide receiver Jarnoriss Hopson on a 22-yard pass play for a touchdown with 9:41 left in the first half.  The Eagles also scored the two-point conversion to get within 10-8.

A 30-yard touchdown pass play by the Gators increased the lead to 17-8 with 8:52 remaining in the half, but Horn Lake came back again when senior Cameron Macklinn blocked a punt and went in for the score at the 5:57 mark in the second quarter and the Eagles were back within two points at 17-15.

The Gators had the final answer in the first half when senior running back Jaden Gray scored from five yards away and a 24-15 lead with 49.8 seconds left before intermission.

The second half became a defensive battle with Lake Cormorant upping the margin to 31-15 with 5:13 left in the third quarter after a 40-yard run from Jeremy Henderson. Horn Lake would score once more with a 50-yard fumble recovery scoop and score by Dontavious Allen with 10:24 left in the game for the final score of 31-21.

“These guys, they’re getting better every day,” Nester said about his defense. “A lot of young guys out there and they’re figuring it out. We’re replacing eight seniors from last year and that’s challenging but they’re better and we’re proud of how hard they’re working.”

Both teams have a bye week next week before district play begins for both schools. Lake Cormorant meets Center Hill in 5A district play and Horn Lake travels to Lewisburg in 6A district action.