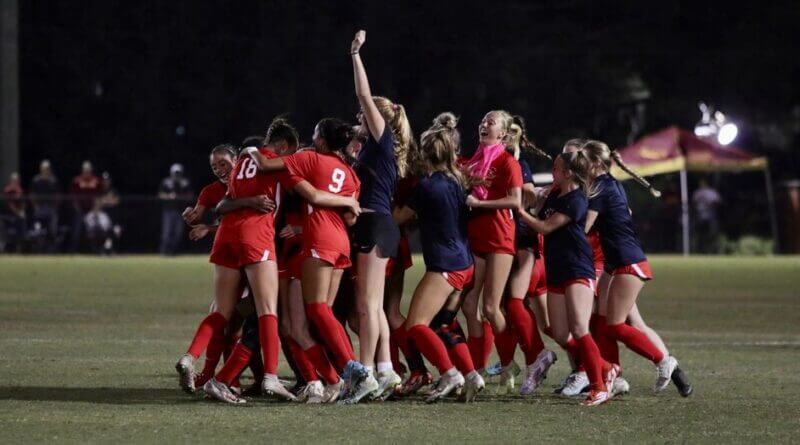 Photo: Northwest celebrates as the clock hits all zeroes in the Lady Rangers’ semifinal victory at Jones College. The Lady Rangers will face Holmes on Sunday in hopes of claiming their first region title and a national tournament bid. (Matthew Alford/Hinds CC)

For the first time since 2006, the Northwest women’s soccer program is one step away from doing what hasn’t been done before: win a Region 23 championship.

Jada Jelks put Northwest in position to do just that, as the freshman forward from Clinton scored just her second goal of the season in the 70th minute of the match, carrying the Lady Rangers to a 1-0 victory against No. 4 Jones College. Though not confirmed yet by official stats, Jelks’ goal was reported to be the only shot-on-goal of the entire match for Northwest, as the two teams tussled in a battle of the conference’s best defensive units.

For Northwest, it’s the Lady Rangers’ first victory against Jones College since September 8, 2007, closing the series gap to an 11-6-1 margin in favor of the Lady Bobcats. The win also improved sixth-ranked Northwest to 13-1-2 on the season and allowed the Lady Rangers to avenge their only loss of the season.

With a region championship and a bid to the NJCAA Division II Women’s National Tournament on the line, Northwest and Holmes will square off on Sunday, Nov. 6 at 4 p.m. in Ellisville. The last two meetings between Holmes and the Lady Rangers have resulted in draws, including a 1-1 battle in Ridgeland on September 30.

Holmes (16-1-1) entered the postseason as the top-seed in the conference, suffering its only loss of the year in the regular season finale to Pearl River and its only draw to Northwest. The Lady Bulldogs got revenge on Pearl River in Friday’s semifinals with a 1-0 victory, after scoring the decisive goal in the 77th minute.

Sunday’s championship bout can be seen live on jcbobcats.com/watch, with tickets available for purchase at jcbobcats.com/tickets.