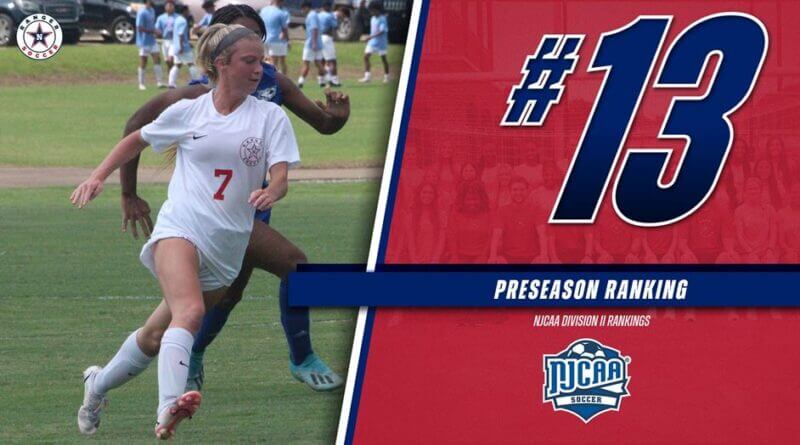 For the first time in program history, the Northwest women’s soccer program will begin the regular season as a nationally-ranked squad.

With the preseason NJCAA Division II rankings announced Monday afternoon, the Lady Rangers are labeled as the No. 13 team in the nation.

Although Northwest was unranked to begin the fall 2021 season, coach James Beattie’s squad quickly ascended into the national polls after an 8-0 start, a stretch that included a 3-1 road upset of then-No. 2 East Central. From there, the Lady Rangers were a mainstay in the polls, finishing with a No. 11 ranking after a 15-3-1 record and a trip to the MACCC/Region 23 semifinals.

Northwest was joined by several MACCC programs in this year’s preseason rankings. Holmes topped the list of conference foes at No. 5 overall, followed closely by Jones College at No. 6. East Central rounded out conference representation at No. 18 overall.

This is the second preseason ranking for Northwest after earning a No. 5 preseason slot by the Verizon/United Soccer Coaches poll. The Lady Rangers also finished last year ranked in the top five of that organization’s list.

Northwest brings back a vast array of talent, including last year’s freshman sensation Jennifer Enriquez. The midfielder, now a sophomore, rewrote the program’s single-season and career assist records, and will play another vital role in the Lady Rangers’ success this season. Midfielders Eliza Olive of Lewisburg, Melinda Hernandez and defender Malaesha Liddell of Lake Cormorant are also returning for Beattie’s club, along with a strong freshman core.