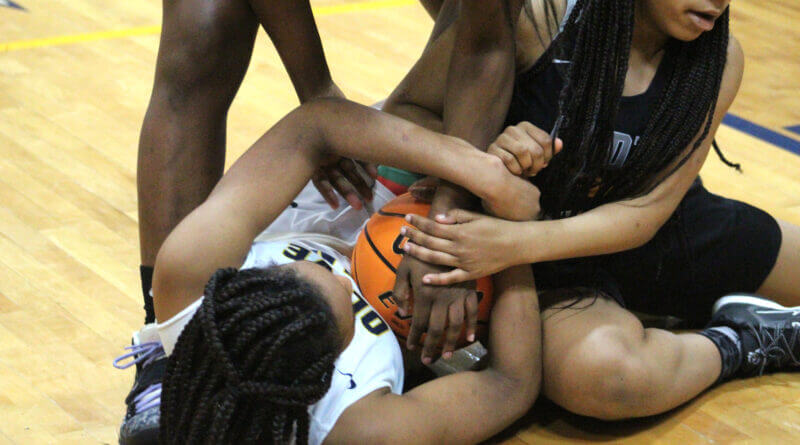 Olive Branch moved into the Elite Eight of MHSAA 6A girls basketball Wednesday night and will host Madison Central on Friday for the right to move into the Final Four on March 3 at Mississippi Coliseum in Jackson.

The Lady Quistors held off the challenge of county rival Hernando 62-48 at Charlie Bibbs Gymnasium behind the balanced scoring performance of three players, led by Brynea Eason’s 18 points.

Meanwhile, Hernando also got 18 points from Andrea Manning and 13 from Abbey Harrison in their effort with the difference in the game coming in the second quarter. That was when Olive Branch broke away from an 11-11 first quarter tie and outscored the Lady Tigers 21-10 in the second quarter for a 32-21 advantage at halftime.

“We made a few adjustments and did the things we needed to do,” said Olive Branch coach Jason Thompson. “We figured out what they were trying to do and tried to stop it. Offensively, we just tried to be smart and take the opening of what they gave us.”

Amya Black led the Olive Branch offense in the first quarter with seven points, but Hernando got an answer by Zyqira Smith with all six of her points for the game coming in the opening eight minutes of play.

Coach Daniel Forbes’ Lady Tigers then went to forward Abbey Harrison in the second quarter, as she scored eight of her 13 points before halftime.

“She’s got a big future, I hope she enjoyed this year,” Forbes said of his post player. “I’m looking for big things from her next year.”

However, Eason hit on 10 of her 18 points in the second frame and got support from Rhema Pegues with nine of her 16 points all coming in the second to help fashion the 11-point bulge at the break.

It was Black’s turn again with a pair of three-pointers in the third quarter for the Lady Quistors, but Manning hit a pair of treys of her own and added a pair of baskets for a 10-point quarter for Hernando.

Manning scored five more points in the fourth quarter, but she was playing in foul trouble and finally gave up her fifth personal late in the contest.

Both Manning and Victoria Walton were saddled with foul trouble in the first half and Forbes felt that may have been a turning point in the contest.

“When your two best guards have three fouls and you have to bench them early on, it gets them cold and off-rhythm,” Forbes said. “I think the game was decided when they both picked up their third foul in the second quarter.”

Five separate Olive Branch players found the scoresheet in the final eight minutes to finish up the contest.

Madison Central advanced with a 43-41 victory over Starkville Wednesday to also move into the Elite Eight.

Olive Branch gets the home court for the contest, although both teams are number one seeds, because Olive Branch has the lower number region than does Madison Central, according to MHSAA rules.