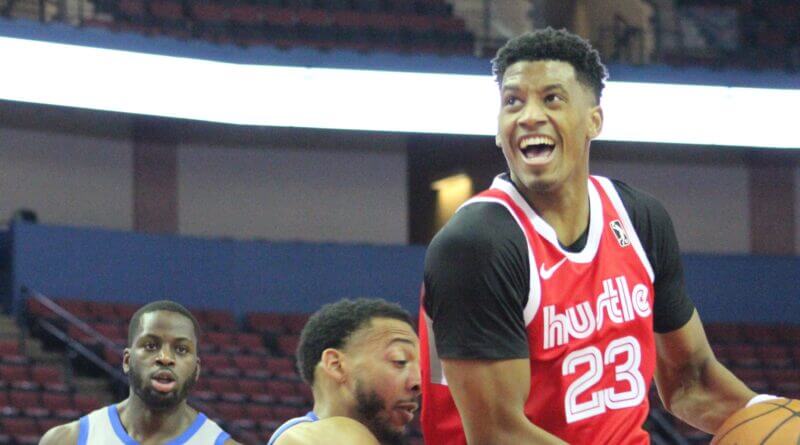 Sam Merrill’s 25 points led the Memphis Hustle to a 106-100 NBA G League victory over the previously-unbeaten Texas Legends (4-1) Tuesday night at the Landers Center in Southaven. It was Memphis’ third game of the initial Showcase Cup and put the Hustle’s record at 2-1. While all three games have been played at the Landers Center, Tuesday’s action was officially the team’s home opener. The previous two games against Mexico City were noted as Mexico City home games.

Merrill, an affiliate player from the parent Memphis Grizzlies, was 10-of-15 from the floor against the Legends, the Dallas Mavericks’ G League affiliate. The former Utah State standout was also 4-of-9 from the three-point line and connected on his only free throw attempt.

Merrill exploded in the final two minutes of the game with a pair of three-pointers and other big plays that helped put the game away.

“I thought we got a little stagnant offensively there at times and Sam did what he does,” Hustle coach Jason March said. “He made a couple of big shots for us when we needed it to go, which was huge for us down the stretch.”

Merrill was one of five Hustle players in double figures against the Legends, as Jarrett Culver scored 21, Yves Pons came off the bench to score 15, and Killian Tillie added 13.

Merrill and Culver posted season highs Tuesday with their 25 and 21 points, respectively.

Carlik Jones of Texas, the NBA G League’s fourth-leading scorer, had game-high honors with 30 points, scoring 12-of-26 from the floor, 4-for-6 from beyond the arch, and a free throw for two points.

The Legends took a 27-25 lead after one quarter but the Hustle came back in the second quarter to take a 48-46 lead at halftime, a first half that included a brief dust up between Memphis’ Shaq Buchanan and Texas’ Eugene Omoruyi with 47 seconds remaining in the half.

“He (Omoruyi) had something to say to one of our biggest competitors on our team, and that was Shaq (Buchanan),” said March. “Shaq’s not going to listen to him, so I don’t blame him. I think it was money well spent,” apparently alluding to the possibility of fines coming from the confrontation.

Both players were given technicals but Omoruyi was also ejected after the fracus was reviewed by the officials on video.

“I loved how we came out of the half offensively,” March said about the Hustle’s play in the third quarter, which saw Memphis score 34 points and take a five-point lead into the final 12 minutes at 82-77. “But it was all set up defensively. We got stops which fueled our offense and we were able to run to start the third quarter.”

Memphis’ biggest lead was at 15 points, while Texas built as much as a five-point lead at one point early in the game. There were 12 lead changes and the game was tied five times.

The teams wrap up their two-game series back at the Landers Center on Thursday night at 7 p.m.

Among those on hand for Tuesday’s contest Memphis Grizzlies head coach Taylor Jenkins, who spent most of the evening seated on the top row of the lower bowl section of the Landers Center watching the Hustle play.