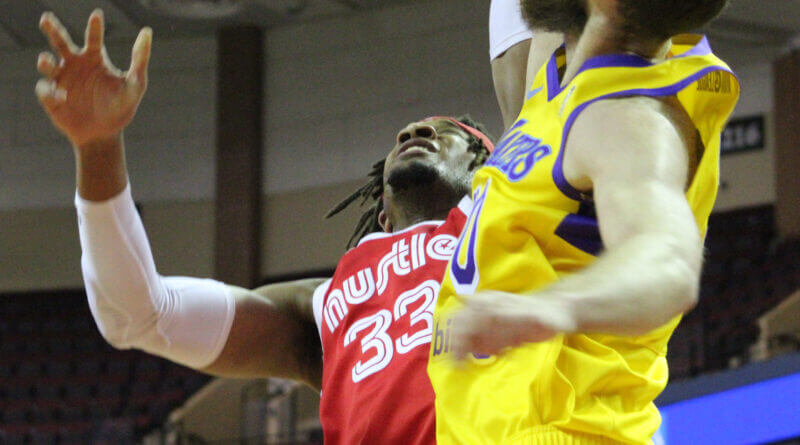 If there’s one thing you learn if you follow NBA G League basketball for any length of time, it’s to stay with the game until it’s over, no matter how bleak it might be.  You’ll never know how it will turn out.

Down 96-76 to the South Bay Lakers Monday night, without starter David Stockton, who re-injured a shoulder in the third quarter, and having scored only two points in the first six minutes of the third quarter, the Memphis Hustle were still only about a possession away late in the fourth quarter before the Lakers were able to pull out a 124-116 victory.

While behind for much of the game, Memphis stuck with the Lakers for most of the first half and at one point had a two-point lead, their largest of the night. But South Bay regained control and took a 65-63 advantage into the locker room at intermission.

Coming out to start the second half, South Bay dominated the period and at one point midway in the third quarter had scored 12 of the first 14 points for a 77-65 lead. The Lakers seemingly had the game put away when the three minute mark of the quarter hit and the lead had become 20 points.

“That’s something we’ve talked about,” said Hustle coach Jason March. “There always seems to be that one quarter. Tonight it was the third quarter, giving up 37 points. We have to continue to stay together through those moments.”

However, Memphis started chipping away from that point and were able to close the gap from 20 on down to within six points in the final minute before the game ended.  The lead was cut to 10 with 2:40 left in the game and was six with 1:20 remaining in the contest.

Both teams were deadly from long range Monday night, combining for 29 three-pointers. The Hustle’s Cameron Young hit five treys among his team-leading 26 points. The Lakers’ Mason Jones struck for four three-pointers among his game-high 28 points as one of seven South Bay players in double figures.

South Bay also controlled the paint with 11 blocked shots for the game.

The loss was the fourth in a row for the Hustle, now 2-6 for the regular season. It’s been a tough stretch but March is still proud of the team’s effort.

The two-game series continues Wednesday night at the Landers Center, starting at 7 p.m. March expects his team will come out ready to play.

And however the game is going, don’t plan to leave early, You’ll miss a lot. It’s the NBA G League, after all.