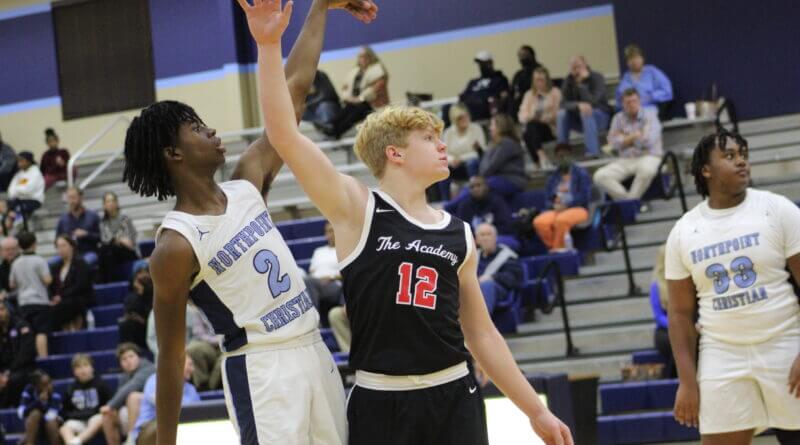 Photo: Christian Gilliland (2) of Northpoint Christian follows through on a shot for two of his game-high 33 points against Fayette Academy Tuesday in Southaven. (Bob Bakken/DeSoto County Sports)

Christian Gilliland dominated the night with a 33-point scoring performance in Northpoint Christian School’s 59-36 victory over Fayette Academy Tuesday night in Southaven. A sophomore, Gilliland erupted for 22 points in the second half to help break open a contest that was tied at halftime 17-17.

Northpoint held a scant 12-11 lead after one quarter over the Vikings but only 11 points were scored between the teams in the second quarter for a 17-17 tie.

Northpoint coach Barry Gray was especially pleased with his team’s defensive play throughout the contest, and when talking about Gilliland, pointed out his play on the defensive end.

“In the second half he locked up their number 12 (Corbin Bowling) like I know he can,” Gray said. “We haven’t required him to guard one of the best and tonight we put him on their best guy.”

Bowling did not score in the entire contest for Fayette Academy.

Gilliland went to work offensively in the second half, scoring 14 points in the third quarter and adding nine more in the final frame to lead all scorers. Darius Naylor was the only other Trojan in double figures with 10.  Ryan Eubanks was the leading scorer for Fayette Academy with 16 points.

Brylee Faith Cherry’s 23 points led the Lady Trojans to their 50-38 win over the Lady Vikings on Tuesday evening in Southaven. Cherry combined with Bethany Wright’s 16 points to put away the visitors, taking a 28-14 lead into the locker room at halftime after building a 15-5 first quarter advantage.

“I thought tonight she (Cherry) was good until she got real tired,” Gray said. “She’s dramatically improved over last year. Her total game is different. She can shoot the three, she can flash in the post, and she defends well. She’s become a more complete player than she was a year ago.”

Fayette Academy kept pace with Northpoint in the second half, but the first half Lady Trojans’ lead was too much to recover from for the Somerville, Tennessee team.

Emmie Moore led Fayette Academy in scoring with nine points, all coming in the second half.