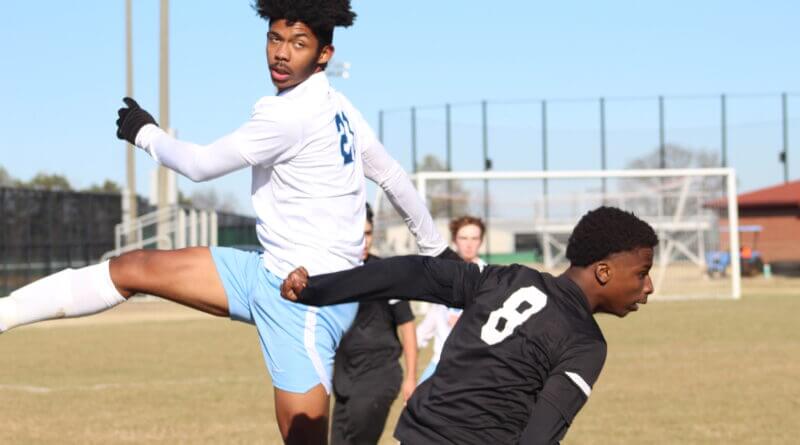 It was a history-making day for the Lake Cormorant High School boys soccer team, a fact coach Jeremy Smith had to remind his charges of even in defeat.

A Gators’ soccer squad had never made the second round of the MHSAA post-season playoffs before Saturday afternoon’s encounter on the home pitch against the Ridgeland Titans. Smith even remembered games where the Gators were beaten by lopsided scores of 20-0 when he played against Lake Cormorant in high school.

But even in a 4-2 loss to the Titans that ended Lake Cormorant’s season, Smith and his assistant looked out across the field at the fans that crowded the bleachers. They were not pleased with the outcome but grateful that the sport has brought increased interest and has become a factor in the athletic program at the school.

The gusty late January wind played a strong factor in Saturday’s game, blowing at the Gators’ backs and in their favor in the first half, but it became a problem to navigate through with the breeze blowing at them in the second half.

The Gators would benefit from the wind and a fortuitous bounce on their way to a 2-1 halftime lead.

Will Silva netted the first goal of the game about five minutes into the contest for a 1-0 Gator lead, but Ridgeland tied it up with 10 minutes remaining in the half on a goal for a 1-1 tie.

That’s when the fortunate bounce, or head in this case, came into play. On a corner kick with players crowding inside the penalty area, the Lake Cormorant kick deflected off the head of a Ridgeland defender into the net for an own goal and a 2-1 Gator lead with six minutes remaining in the half, and that became the halftime score.

The difference in the outcome came in the first 1:30 of the second half with Ridgeland now playing with the wind and pressuring the Lake Cormorant goal.

Two goals were scored in that period of time, markers that moved the Titans from 2-1 down to 3-2 ahead. The first goal would come off a corner kick to tie the match at 2-2 and what would turn out to be the game-winning goal was scored shortly after that when a shot deflected off the Lake Cormorant goalkeeper’s hand into the back of the net.

Ridgeland would add one late goal in the final minute of the contest.

“We had some unfortunate circumstances in the match, such as the PK (penalty kick),” Smith said. “I hope the boys have the perspective to realize where they are at.”

The score could have been worse earlier in the second half when a foul in the penalty area gave the Titans a penalty kick, which was clanked off the right goal post.

Following the third goal, play started to become chippy as tensions grew, reflected by a number of yellow cards meted out by the referee. Most of them went against the Titans, including one to Ridgeland head coach Trey Butts, whose game-long chirping at the officials eventually led to the yellow card being shown in his direction.

“We have to work some on maturity,” Smith said. “I think at times we had more maturity than the other team, but we have some work to do.”

With the victory, Ridgeland will host Columbus New Hope in the North Half finals on Feb. 1.

TIGERS FALL IN 6A SOCCER: Madison Central shut out Hernando 4-0 in the MHSAA 6A second round later on Saturday afternoon. The Jaguars came into Anthony Jenkins Field and scored two goals for a 2-0 lead 22 minutes into the half.

Madison Central added one more for a 3-0 intermission lead and a fourth goal came on a penalty kick with 23 minutes remaining in the contest.

Clinton will now play Madison Central at Madison on Feb. 1 for the North Half championship in 6A soccer and the opportunity to play in the state championship match against either Northwest Rankin or Hattiesburg Oak Grove.