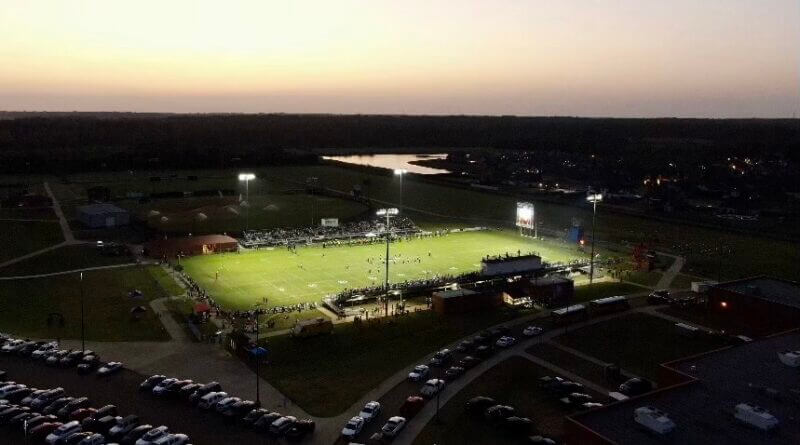 It was the first game of the season for DeSoto County high school football teams and when Lake Cormorant traveled to Lewisburg to start the year Friday night, it also marked the first game as head coach for Patriots’ leader Dustin Hectorne.

It was extra special for Hectorne to take the field with his own team, although the final 40-10 outcome for Lake Cormorant was not a great way to start the year.

But Hectorne was savoring the moment of leading his squad onto the field for the first time.

But it was not a pleasant start for the Patriots, as Lake Cormorant quickly struck for three touchdowns and a 20-0 lead after one quarter.

Quarterback Tevin Amos factored into two of the first three scores with a one-yard plunge for a score and an 11-yard touchdown pass to Kejuan Williams for another.

In between, Jeremy Henderson scored the first of his three touchdowns, running up the middle for 10 yards and the second touchdown of the quarter.

“Jeremy showed a lot of promise last year but we lost him towards the end of the season to an elbow injury,” said Gators coach Nick Nester. “It looks like he bounced back from that pretty good. He looked really good out there for us.”

Henderson caught a 55-yard pass from Amos to open the second quarter for a second touchdown to give Lake Cormorant a 27-0 lead, and he then went 92 yards for his third score and a 34-0 Gator edge halfway through the second quarter of play.

Lewisburg would finally notch points on the scoreboard when Coleman Dowell completed a drive with a four-yard run in the final minute of the first half and a 34-7 halftime score for the Gators.

Defenses started to take over a bit in the second half, but not before Amos found Kevin Watts for a 16-yard touchdown and a 40-7 lead when the extra point kick was blocked.

Lewisburg would complete the scoring with a 23-yard field goal by Zach Dennie with four minutes left in the third quarter. As reserves started to take over in the fourth quarter, there would be no further scoring in the game.

“I think we started fast so that really helped us in the first half,” said Nester. “The quarterback (Amos) looked like a three-year starter, and made some good decisions. Jeremy (Henderson) made some big plays. I was really proud of our effort. Our defense really played well with a bunch of young guys.”

For the night, the Lake Cormorant offense dominated the Patriots by a 565-159 yard margin. The Gators racked up 316 rushing yards to Lewisburg with 49 and in the passing department, Lake Cormorant picked up 249 yards in the air to 110 for the Patriots.

Henderson ended the night with 235 yards on the ground for the Gators.

“It’s how we play and how we come out to attack and we didn’t do that in the first half,” Hectorne said. “I felt like we did it a little bit better in the second half. We’ve got to build on that. I think we did some good things but it’s got to be consistent and we weren’t consistent tonight.

One thought on “Gators chomp Patriots to open football year”