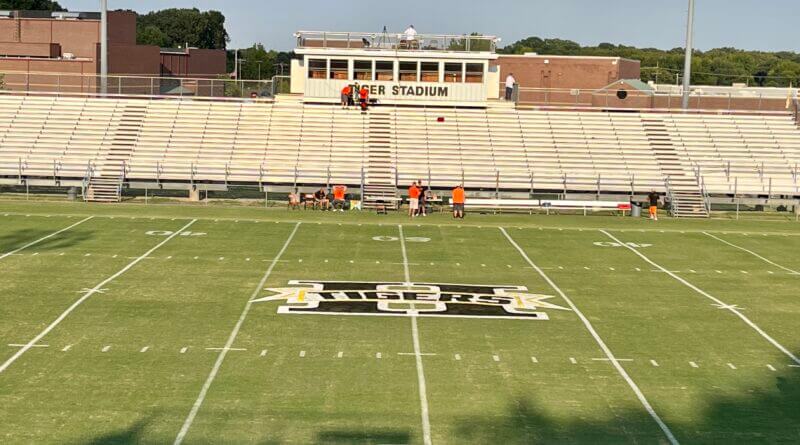 An expected high-scoring high school football affair became a rout favoring the home team in a 55-29 beat down of the visiting Malvern, Ark. Leopards Friday night in Hernando.

Tigers’ first-year head coach Steve McCann expected Malvern to bring a lot of offense, centered around quarterback Cedric Simmons and running back Jalen Dupree, both getting solid Division I college interest. The pair had ignited the third-ranked Class 4A Leopards to a perfect 3-0 record, having scored no fewer than 35 points in those three wins.

Meanwhile the Tigers had sought some redemption and confidence going into 6A regional play next week after dropping a 15-13 decision to Grenada, a game the Tigers likely felt they should have won.

The first quarter gave a quick indication that fans expecting an offensive fireworks show were going to be greatly pleased with what they saw.

On the second play of the game, Dupree caught a pass from Simmons and finished a 76-yard pass-run play to paydirt and a 6-0 lead when the kick conversion attempt went wide. Only 44 seconds had elapsed in the game.

Hernando answered quickly, needing only 16 seconds to score when freshman Tommy Brown broke free and scored from 60 yards out, followed by Jackson Uselton’s kick conversion for a 7-6 Hernando advantage. The first quarter clock showed that just one minute had been played in the game.

Quarterback Topher Jones added to the lead for Hernando with 8:31 left in the first with an eight-yard run for a 14-6 Tigers’ lead.

But Malvern’s Dupree found the end zone again, this time from 34 yards away, and the Leopards tied the game with a two-point pass play at 14-14.

Hernando again took the lead with 3:50 left in the quarter on Jones’ second touchdown run of the game, from 25 yards, to give the Tigers the lead back, at 21-14 at the end of the quarter.

The second quarter saw the Leopards take a one-point, 22-21 lead with only 1:14 gone in the period after Simmons ran in from three yards out.

Later in the quarter, Jones was hurt being tackled on a run and Landon Speck entered the game as his replacement. Speck came through to throw a 40-yard scoring strike to sophomore Saxton Douglas with 8:45 left before halftime, a play that gave the Tigers 28-22 lead and a margin they would not give up the rest of the game.

Hernando would break the game open in the third quarter. Running back Brodie Martin scored twice, from 34 and nine yards out. Tyler Starnes completed a 64-yard pass-run play from Speck, and Malaki Bryant returned an interception for another touchdown, as Hernando broke away for a 55-22 lead going into the fourth quarter.

Malvern would get one more touchdown, as Simmons scored his third rushing touchdown for the contest from 46 yards for the 55-29 final in a game where the final 12 minutes were played with a continuous clock.

For the Leopards, Friday marked the lowest point output since a season-opening 35-0 victory at Searcy Riverview. The Tigers produced their highest offensive point production since a 34-0 shutout victory over Tunica Rosa Fort to start the season.

Hernando now opens the Region 1-6A season next Friday at South Panola.

Also Friday, in JUCO volleyball, it was: