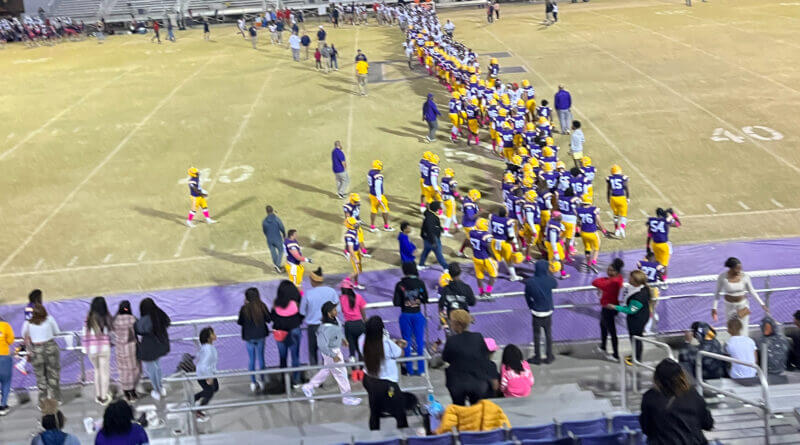 The South Panola football Tigers dominated the DeSoto Central Jaguars 35-0 Friday night at DeSoto Central, a game the Tigers had control of from the very start.

DeSoto Central dropped into a third-place tie with Center Hill at 3-2 in the region. The Jags fell to 5-4 overall.

After a fumble recovery by South Panola on the Jaguars’ opening possession, running back Julius Pope ran in from 19 yards out for a touchdown with 10:20 to go in the opening quarter and a 7-0 Tigers’ lead.

Later in the quarter, Tigers’ Michael Johnson went in from two yards away to increase the lead to 14-10 South Panola at the end of the first quarter of action.

South Panola added another score in the second quarter on Pope’s second touchdown of the game, a three-yard dive for a 21-0 advantage at halftime.

In the third quarter, the South Panola lead became 27-0 when D’mariun Perteet scored from 11 yards away. The extra point kick was blocked, however, as the Tigers held on to the 27-point margin.

Quarterback David Hubbard wrapped up the scoring with a three-yard run and a two-point conversion run by Johnson became important because it meant a 35-point lead at 35-0 and the running clock mercy rule went into effect, keeping the game clock moving for the remainder of the contest.

Elsewhere in DeSoto County prep football Friday night, one-sided results were common with one exception. Center Hill won its first ever football meeting with crosstown rival Olive Branch 24-20.  The Mustangs had to rally, trailing 20-17 before a late touchdown gave Center Hill the victory.

Southaven spoiled Lewisburg’s homecoming with a 48-0 thrashing of the Patriots.  The Chargers blistered Lewisburg’s defense with 463 yards of total offense to 154 for Lewisburg.

In other games, Hernando rolled to a 37-0 lead before Horn Lake scored late in a 37-7 Tigers’ victory, Lake Cormorant won an important Region 1-5A contest with Columbus New Hope 35-3, a win that kept the Gators in fourth place and still in the playoff hunt.

Northpoint Christian roared past Memphis Sheffield 49-7 in a game that was part of the school’s 50th anniversary celebration.