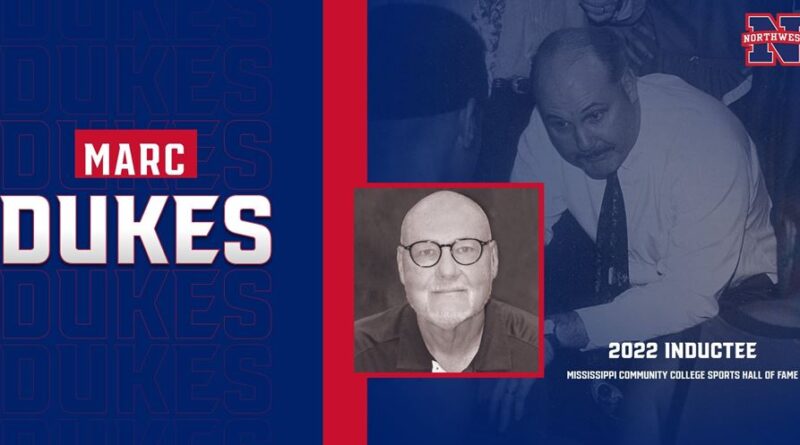 Former Northwest men’s basketball coach Marc Dukes has been selected as this year’s inductee into the Mississippi Community College Sports Hall of Fame.

Dukes becomes the 19th selection from Northwest into the Mississippi Community College Sports Hall of Fame, since its inception in 2008. He is also the 11th Northwest coach to be inducted, joining a legendary group that includes Bobby Franklin, Jim Miles, Harry Adair and last year’s honoree, Don Edwards.

Prior to cementing his legacy in Senatobia, Dukes had coached for 13 seasons in the high school ranks, spending 11 of those years in Mississippi. Four of his teams were ranked in the top 10 in the state, with his 1985 team winning 36 games and finishing as the Class AAAA runner-up for one of his two state tournament appearances. He twice received Coach of the Year honors and was named the WDAM-TV Coach of the Year in 1985.

Dukes was named the head coach at Jones County Junior College in 1986 and finished 87-53 overall in five seasons with the Bobcats. He led JCJC to five consecutive winning seasons and his 1990-91 team set a school record with 21 single-season victories. Dukes left Jones for a brief stint as the head coach at Pineville High School in Kentucky before being hired to lead the Rangers.

In 1995-96, he guided Northwest to a 30-win season and the program’s first NJCAA National Tournament bid since 1980. That team concluded the season by finishing sixth in the 16-team tournament field. Two years later, the Rangers finished 29-7 overall and made the program’s only trip to the NJCAA Final Four.

Dukes left Northwest in 1998 to take an assistant position on Rod Barnes’ coaching staff at Ole Miss, helping coach the Rebels to three NCAA Tournament appearances, including the program’s only trip to the Sweet 16.

Dukes later returned to the coaching ranks at the high school level, taking the boys’ basketball head coaching job at Magnolia Heights School in 2013. In his first two seasons, he guided the Chiefs to the MAIS Class AAA Division II state championship and posted a combined 60-15 overall record.

Following his retirement from Magnolia Heights after the 2016-17 season, Dukes has served as a basketball color analyst alongside David Kellum on the Ole Miss Radio Network. He was previously inducted into the Northwest Sports Hall of Fame in 2015.

This year’s Mississippi Community College Sports Hall of Fame induction ceremony is scheduled to take place on Tuesday, April 26 at 6 P.M. The ceremony will be held at the Muse Center at the Rankin County Campus of Hinds Community College.