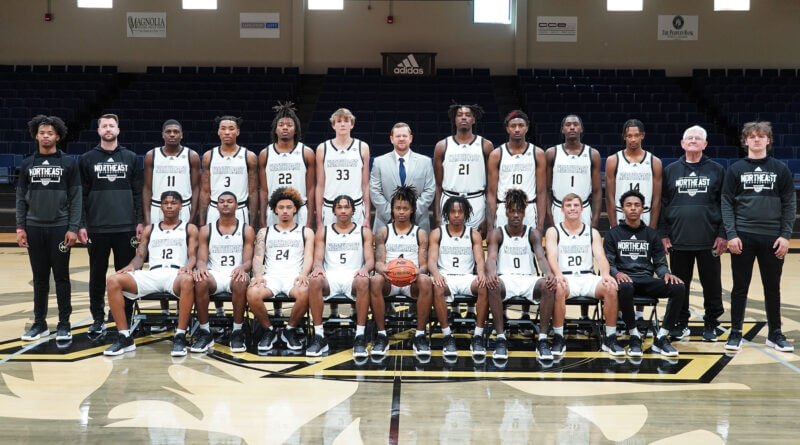 The Tigers boast five players that stand at 6-6 or greater. The average height of Northeast’s entire roster is 6-4, which is taller than any lineup that Cord Wright has assembled in his decade as head coach.

“It’s been a blessing to be here this long. Ten years kinda has flown by,” said Wright. “There’s been a lot of good memories and a lot of good victories. These are positive things and we continue to keep it going in that direction.

“I think from top to bottom, we’re as talented and as deep as we probably have been since I’ve been here. This group is extremely tall and athletic. Even our guards are 6-3, 6-4 and physical. Those are areas we tried to emphasize in recruiting.”

Not only do the Tigers look the part, but they have a national ranking to back up the notion of being a title contender. Northeast appears at No. 21 in the National Junior College Athletic Association (NJCAA) Division I preseason poll.

The Tigers bring back only four players that saw the floor from last year’s squad that compiled a 23-6 overall record and finished as the runner-up in the Mississippi Association of Community Colleges Conference (MACCC).

However, Northeast pieced together another talented recruiting class that features eight true freshmen and one transfer from a NCAA Division I institution. Seven of them received all-state honors at their respective high schools.

Leading that tandem are a pair of selections to the Alabama-Mississippi All-Star Game in Anthony Johnson and Corey Stephenson. Stephenson averaged a double-double of 26 points and 10 rebounds as a senior at Hueytown (Ala.) High School.

Johnson also participated in the 2021 Alabama High School Athletic Association (AHSAA) North-South All-Star Game after guiding his alma mater of Midfield (Ala.) to a state title. He was the Most Valuable Player (MVP) of that contest with 27 points, five boards and three steals.

There are seven total former state champions on the Tigers’ active roster. That includes Holmes County Central’s Malik Crigler and Allen Hughes of Clinton, who both captured back-to-back crowns as juniors and seniors.

Jonathan Lucas comes to Northeast after starting his collegiate career at McNeese State (La.) University. He was recognized as the 2021 Mississippi Association of Independent Schools (MAIS) Class 4A Player of the Year after winning a state championship at Hartfield Academy.

Shane Davis is the tallest of the Tigers at 6-10. Lucas follows at 6-8 while Isaiah Regular, who earned All-Metro distinction from The Daily Memphian at Overton (Tenn.) High School stands at 6-7.

Jalin Rice, who joins Davis as alumni of Madison Central High School, is making history by sticking with Northeast for a third year after gaining an extra season of eligibility due to the worldwide coronavirus outbreak.

“Jalin is not only a tremendous basketball player, but he’s just an all-around kid in the classroom and off the floor,” said Wright. “Last year he battled some injuries, but he’s got his bounce back so we really expect him to have a big year.”

Steven Gentry, Jr., Cam Smith and Rice all started at some point for the Tigers during the previous campaign. Rice and Gentry, Jr., topped Northeast in assists with 3.9 and 3.4 per outing, respectively.

Rounding out the lineup for the Tigers are returners Keithean Brooks of Lake Cormorant and Germantown’s Trey Tate plus newcomer Caleb Parr from New Hope. All three should rotate in-and-out at the guard position.

“We’re excited about this upcoming season like we are every year,” Wright said. “Not only do we look the part, but I think when we get out there our skill level is where we need to be.”