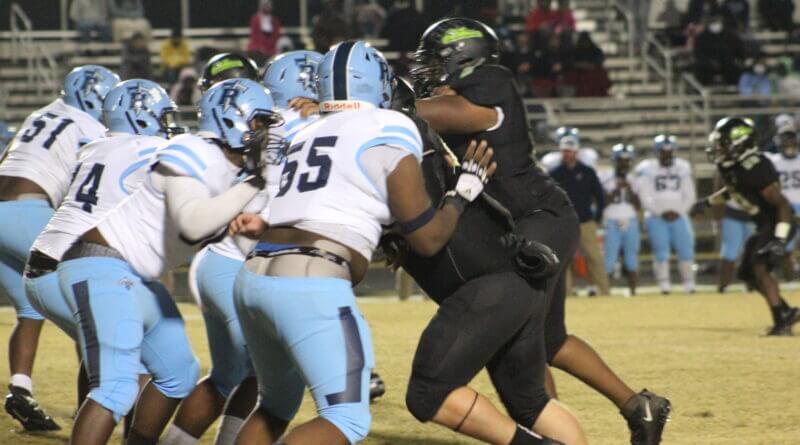 Donovan Bell scored on a nine-yard pass reception play with 13.8 seconds remaining in the game to give the Ridgeland Titans a 36-28 MHSAA 5A first round playoff win over Lake Cormorant.

It was a bitter pill to swallow for the Gators, the number two seed from Region 1-5A that was the only DeSoto County football team to host a first-round playoff contest Friday night. Lake Cormorant finished the year with a 7-3 overall record.

“Our defense I thought played really, really good tonight,” coach Nick Nester said after the game. “Offensively, we didn’t score much in the second half. Our guys fought hard, we just made too many mistakes.”

Bell scored twice for the Titans, which improved to 7-2 with the victory. His 13-yard pass catch midway through the first quarter gave Ridgeland an 8-7 lead after the two-point run conversion.

Lake Cormorant had taken the initial lead in the game with Jaiden Gray’s one-yard run for a score with just under three minutes played in the contest.

Ridgeland put some distance from the Gators a bit with a late first quarter touchdown run and a 32-yard pass play from quarterback Zy McDonald to Richard Mays which gave the Titans a 20-7 lead with 10 minutes left in the first half.

The Gators, to their credit, came back with a five-yard run from Jordan Martin for a score.

Martin also scored on a 47-yard pass-run combination from signal caller Telvin Amos as time ran out in the first half, a touchdown that gave the Gators a 21-20 lead going into the locker room.

“Our guys got fired up, knowing we were going to get the ball to start the second half,” Nester said about the touchdown ending the first half of play. “It didn’t work out the way we wanted it to.”

Ridgeland could have easily broken the game open in the third quarter with two deep drives into Lake Cormorant territory, but the Titans were stopped at the three-yard line on fourth down once, and again stopped on a fourth down play at the Gator 10 yard line.

Fireworks happened in the fourth quarter ahead of Bell’s game-winning touchdown, as Titan teammate McDonald went over from five yards out to give Ridgeland a 28-21 lead with just under four minutes left in the game, but Tony McCray took the following kickoff for the Gators and scored from just under 80 yards out. It was a touchdown that tied the game at 28-28, heading into Ridgeland’s game winning drive.

Lake Cormorant had a last gasp attempt with five seconds left, but a pass reception ran the clock, and the season, out for the Gators.

HERNANDO 36, SOUTH PANOLA 33: Hernando became the only county school to advance to the playoffs’ second round with its win in Batesville Friday night.  The winning score came with 3:16 left in the game and the final score came on a two-point conversion after that touchdown.  On the game-winning drive, a key play was a fourth down conversion on a fourth-and-five call.  Hernando (6-4) now travels to Oxford (10-0) next Friday to face the defending MHSAA 6A state champion Chargers, who defeated Madison Central 25-23 to win its 23rd consecutive contest.

CLINTON 35, HORN LAKE 7: The Arrows came away with a solid victory over the Eagles (5-5) on Clinton’s home field Friday night, taking a 28-0 lead into the locker room at halftime. Drevian Williams returned a fumble 17 yards for the Eagles’ only score in the third quarter.