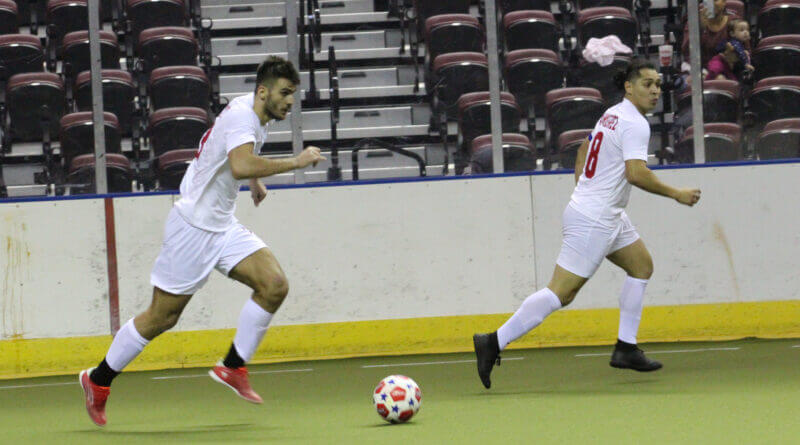 The first appearance of the Memphis Americans NISL pro indoor soccer franchise at the Landers Center was a solidly successful one Sunday afternoon and evening over the Columbus Rapids.

Both the men’s team and the women’s team won convincing victories over their Georgia counterparts, 6-0 for the men and 10-2 for the women. It marked the first time for the Memphis Americans to take the field since the old Americans’ franchise played at the Mid-South Coliseum in the 1980s.

Midfielder Djordje Djordjevic scored two goals and added an assist in the Americans’ victory over the Rapids in the opener. Adamson, along with Jowayne Laidley, Mike Scharf, and Samuel Castro, also scored single goals and added assists.

They backed up the stellar goalkeeping of veteran Piotr Sliwa. The Polish native who played for Dominican University made 19 saves in posting the shutout.

“This was his first career shutout,” Adamson said. “He just came out of retirement to play for this team. He got himself into shape and showed up as a leader. He made some unbelievable saves today. It was a fantastic showing for him.”

In a game played in four, 15-minute quarters, Memphis struck first at 2:45 of the first period with a goal from Laidley, followed by Djordjevic’s first goal of the game with just 10 seconds in the quarter.

“He’s been a blessing to this team because of how hard he works,” said Adamson about Djordjevic. “He’s a menace, he’s an absolute menace.”

The Americans added a goal from Castro with just under five minutes left in the half for 3-0 lead at intermission.

Memphis broke the game open in the third quarter on goals from Djordjevic and Scharf for a 5-0 lead heading into the final quarter, which was punctuated by Adamson getting on the scoresheet with 1:37 remaining for the final score.

In the women’s game that followed, Ashlynn Jones and Bruna Leiria each had three-goal hat tricks in the 10-2 victory over the Rapids.

“Their technical ability is unmatched. Their physical ability is incredible. They’re both very quick, extremely strong, and they understood what their role was and how they could make themselves more dangerous in our system.”

Leiria scored the first-ever women’s NISL pro indoor soccer goal at 7:58 of the first quarter for a 1-0 Memphis lead, but Columbus tied the game at 1-1 with about five minutes left in the first half on a drive from the right side by Megan Byers.

However, the next seven goals went to the Americans. Kelsey Keown netted her first goal with 4:19 left in the half, followed by Jones’ first of her three goals at 1:47 before halftime. Kristen Sparks found the back of the net with 26 seconds left before the break to 4-1 Memphis at halftime.

In the third quarter, Memphis’ offense continued to push the issue, with Jones scoring her second and third of the night in the third quarter. The third goal came with the Americans on the power play with a Columbus player in the penalty box.

Fourth-quarter goals from Leiria and Kim Uruquia increased the margin to 8-1 Memphis before Olivia Jarrell answered for Columbus on a direct free kick for what would be the Rapids’ final tally.

Leiria completed her three-goal hat trick with 2:59 remaining, and Lauren Odino added one more for good measure with 21 seconds left for the final score.

Former Northwest Mississippi Community College and University of Montevallo standout goalkeeper Angel Hailey of Southaven stopped 14 of 16 shots on goal for the victory.

“She is one of the most talented goalkeepers,” Adamson said of Hailey. “She gets everything low, anything high. Coming out here and playing the way she did was incredible stuff for her. She’s going to be a star in this league.”

Memphis returns to the Landers Center Thursday night to meet the Rome (Georgia) Gladiators. The men’s game starts at 5:30 p.m.