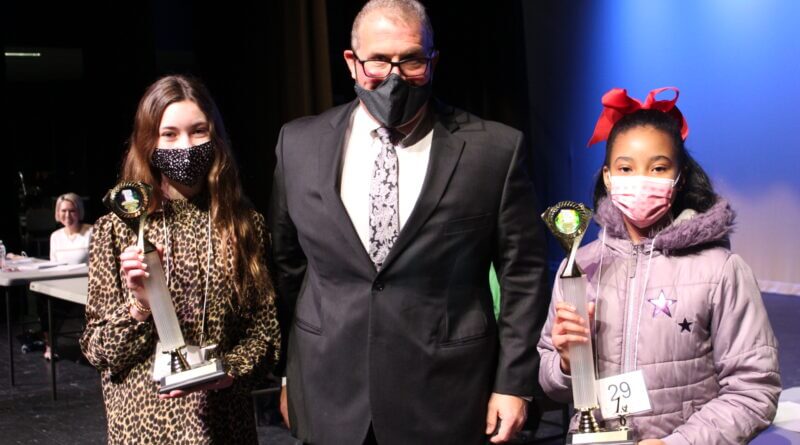 The words they were given to spell are provided by the media corporation Scripps and pronouncer Dr. Jerry Wayne Floate, Hernando Middle School principal, strictly goes down the list as is provided.

Scripps each year has held the Scripps National Spelling Bee, although last year’s spelling bee was canceled because of the COVID-19 pandemic.

The pandemic was addressed in Saturday’s county spelling bee, as competitors were spaced apart, everyone was required to wear masks, and spellers could only remove them briefly when they reached the microphone to spell their given word.

Spectators were also spaced at a required distance and seated in every other row of the center. The spelling bee in the past has been held at the district Central Services Board of Education room but was moved to the Performing Arts Center this year to provide more space and follow CDC guidelines.

DCS associate superintendent Van Alexander, who served as master of ceremonies and recorder, and Floate, both said the word list from Scripps this year was among the most difficult they had encountered in the years they had been a part of the event.

It showed in the first round, as the 41 initially in the bee were quickly reduced to 11 spellers. The 11 were diminished to five spellers in the next round. The same five remained through another round,  but the following round culled the group down to only Witherspoon and Northpoint Christian School’s Sara Louise Manley, a seventh grader.

Manley missed her word but Witherspoon spelled hers correctly, which gave her the championship.

“Every single day when I get home from school I just study all of the time and my mom just tests me,” Gabriella said. “So, I thank my mom for helping me win this spelling bee. She put a lot of confidence in me.”

A video recording of the Spelling Bee is found on the DCS Community YouTube channel: