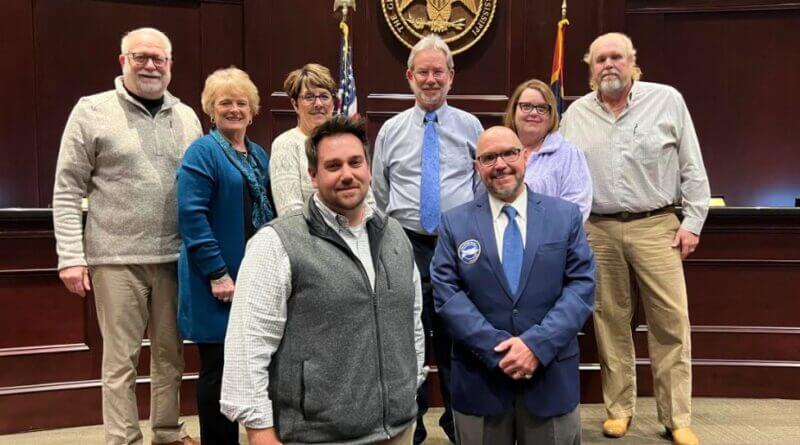 Olive Branch Mayor Ken Adams has recognized City GIS Manager Scott Trapolino as the December Mayor’s Award recipient. Trapolino was chosen among eight city employees that were nominated. Donations fund the $200 award given each month’s recipient so it does not come out of city coffers.

The presentation was made during the Board of Aldermen meeting on Tuesday evening.

Director of Planning and Development Jason Gambone said of Trapolino, “To help City Engineer (Andy) Swims make a determination as to what upgrades may be warranted to the City’s sewer system to accommodate the Cascades project and others that feed into a particular sewer interceptor line, Scott used GIS to map the entire sewer basin. This built on the work his consulting firm had done over the summer to scan “as-built” drawings into the database and many hours of work Scott has done since to update and make corrections to the City’s sewer infrastructure map.”

Gambone went on to state the final product maps the sewer basin in question and shows every line and property that is currently adding sewage to the interceptor line in question.

“What is most impressive is the quality of the final product and the speed at which Scott was able to produce it,” Gambone wrote. “He literally watched an instructional video on how to prepare a sewer basin map and had it completed within three working days of the request. He is the epitome of a highly skilled and motivated employee; a true problem solver.”

Swims added, “Our ability to give consultants this kind of information reduces cost and saves time that would otherwise be spent on tracking down this information. After our meeting on this, we handed the consultant the tools they need to come back with designs and recommendations that have a great deal of accuracy. For engineering, this is invaluable.”