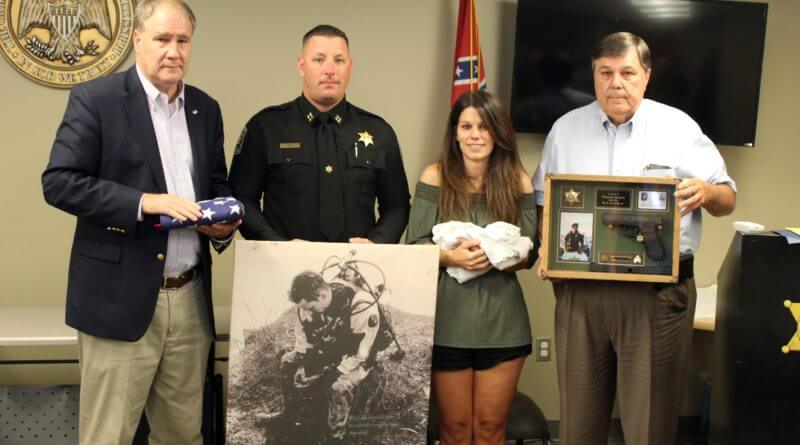 Still dealing with the tragic loss of her husband last month, Lindsay Nichols was reminded that his fellow workers with the DeSoto County Sheriff’s Department continue to care for her and her family.

On Monday, Aug. 24, Lindsay Nichols visited the Sheriff’s Department for the first time since her husband’s tragic death and Sheriff Bill Rasco and deputies continued their outpouring of support for her and her family.

They received a Congressional boost with the visit of 1st District U.S. Representative Trent Kelly, who came to present Lindsay with a U.S. flag that was flown in his honor atop the Capitol in Washington.  Kelly said Nichols’ name was also read into the Congressional Record for his actions.

The congressman said NIchols was an example of the true character of the vast majority of law enforcement officers in the country.

“I back the blue and I will always back the blue,” Kelly told Lindsay Nichols. “On a daily basis we have men and women in the blue that save people’s lives, that have a history of going out and helping people. They run to people in trouble when other people are running away.”

Dep. Nichols lost his life while the family was vacationing in Florida. His son, swimming in the waters, was caught in a rip current. Nichols swam out in response, and while Nichols was able to save his son, he himself got caught in the waters. The incident took place on Wednesday, July 22.

Officials said NIchols was pulled back into the waters saving his son. Rescuers from the South Walton Fire District were able to retrieve Nichols and began to give him CPR once back on shore. He was taken to a nearby hospital where he was pronounced dead.

Monday, Lindsay Nichols also received other items from the Sheriff’s Department, including a “Hero” canvass, a shadow box containing his weapon and other items that were on his uniform, along with a number of T-shirts that had been made in his honor to raise money for the family.

“I’m very blessed and humbled,” LIndsay Nichols told the gathering. “I’m very thankful. I’ve never been up here before. We’re truly grateful for everything and I appreciate it. Just keep praying.”

In his opening prayer, Sheriff Bill Rasco expressed thanks for the service Nichols provided while with the Department and that his family would be shown that Nichols would never be forgotten and would always be missed.

Nichols had been with the Sheriff’s Department since 2010, when he joined as a patrol deputy. He originally was volunteering with the Search and Rescue unit before attaining a full-time status in that area.

As director of the unit, Nichols served in that role for seven years.