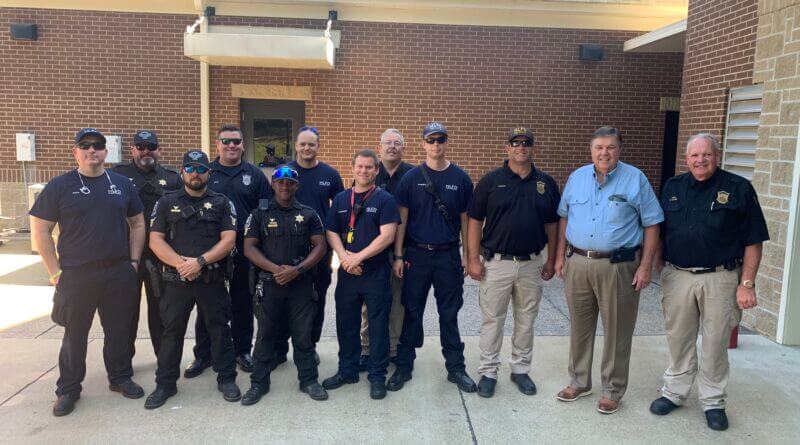 The sheriff came to town Tuesday, June 15, not to make a big arrest, but armed with an important message.

Tuesday was the second day of the week-long Fire Academy for Kids with the Horn Lake Fire Department. Close to two dozen youngsters got to hear from DeSoto County Sheriff Bill Rasco about safety and making good decisions.

Rasco spoke to the kids, ranging in age from 8-12 years old, who are coming to Fire Station 3 on state Highway 301 each morning during the week through Friday. The sheriff’s message was that it was important to choose wisely and not be careless about staying safe.

Along with Rasco were members of the Sheriff’s Department, volunteers, and the Sheriff’s Search and Rescue crew, bringing their boats and motorcycles to view, sit on and get into.

Deputies described their protective equipment and explained their importance to what they do in public safety. The emphasis for the day was gun safety as well as smart decision making.

Wednesday, the youngsters learn about first aid and CPR with the firefighters and members of the Hospital Wing helicopter that will be flying in and making a landing for the kids to then view.

“We will do the medical stuff, going over first-aid, bandaging,” Linville said. “We have some mannequin stuff and we probably will do chest compression with that.”

Thursday is a water fun day when the firefighters set up a big water slide and let the kids have fun in the water.

Friday, the academy graduates the youngsters with an appearance from Horn Lake Mayor Allen Latimer. They’ll receive a certificate and trophy for their participation. A big moon bounce house called “Sparky” will also be on hand for fun. It was acquired for the program but wasn’t used last year when COVID-19 canceled the academy for the first time in an extensive history.

“I know we’ve been doing it for at least 12 years,” said Linville.  “The first one we did was at Station 1 and (Michael) Casey started this program. Casey got really active in it and kind of kicked this off the ground.”

Michael Casey was a long-time member of the Horn Lake department who did a lot of the education programs, especially with youngsters, until his passing in 2018.

Fire Academy for Kids had been held twice a summer for several years but was called off last summer with the onset of the coronavirus pandemic. Linville said they decided to return the Fire Academy this summer but do it just one time for this year.

“Fire safety, cooking safety, swimming, wearing helmets on a bicycle, just trying to be safe,” Linville said. “Mainly it’s about fire because it is a fire academy for kids, letting them see where firefighters sleep and stay.and the paramedics.”