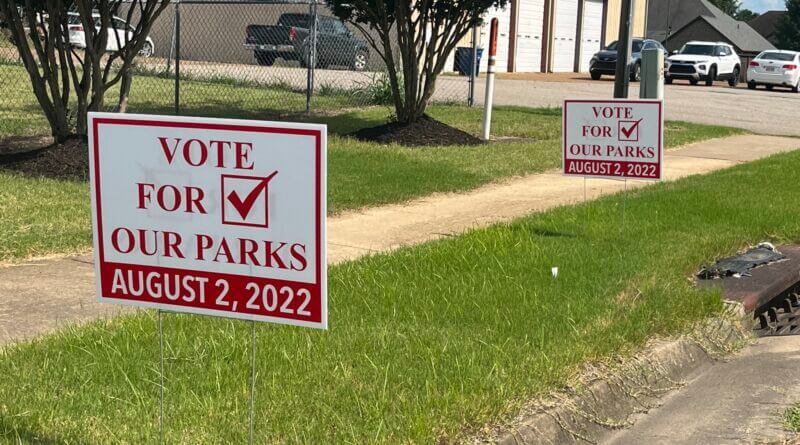 Unofficial totals from the special election Tuesday had 1,587 voters supporting the one-percent tax on room rates, against only 164 voting against. A total of 1,751 ballots were cast.

Olive Branch now becomes the third DeSoto County city that has a local tax. The approximate   $500,000 annually received by the tax will help pay for new parks in the city, additional soccer fields, enhancements in existing parks and recreation facilities and equipment. There was even a vision for a multi-purpose facility for indoor athletics.

Horn Lake also has a local tax on hotel/motel stays, a flat $2 fee per night added for local economic development. Southaven’s Penny for the Parks one-percent additional tax to restaurant bills has helped the city make several enhancements to its parks and recreation program.

In a statement to DeSoto County News after Tuesday’s vote, Mayor Ken Adams said, “The Board of Aldermen and I are appreciative of the strong vote for our parks. We will work diligently to improve our parks to best serve the citizens. One hundred percent of the hotel tax will go into our parks. We are thankful for the citizens who worked diligently to pass this referendum.”

Had Tuesday’s vote not gone in favor of the tax, city officials would have had to go back to the state Legislature for a second approval allowing another vote.

Breaking down Tuesday’s vote by wards, Ward 2 had the most voter turnout with 423 voting in person and 382 voting for the tax. Including absentee and affidavit votes, Ward 2 had 391 in favor and 41 voting against, making it also the ward that had the most opposition.

Those who did voice opposition to the tax appeared to be against all taxes, although as it is set up, only people who stay in the city’s hotels and motels will be paying the extra levy. It will not be directly levied to city residents.

The enabling requirements in the state legislation also requires that the funds generated go into parks and recreation improvements.

Hernando can become the fourth DeSoto County community to approve a local tax when voters go to the polls in November to consider a one-percent restaurant tax. Sixty percent approval would be needed for Hernando to charge a tax on restaurant and prepared food sales, funds that would also go to the parks and recreation program there.