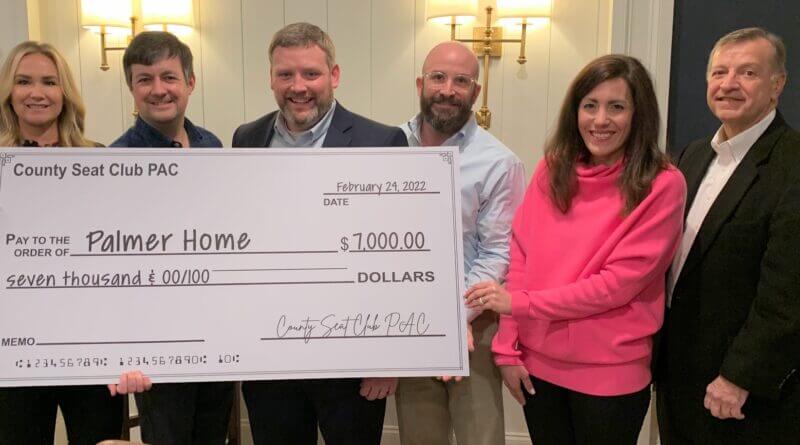 The County Seat Lunch Club PAC of Hernando Thursday presented a check in the amount of $7,000 to the Palmer Home for Children in front of their meeting that featured Congressman Trent Kelly as guest speaker.

The check funds come as proceeds from the recent appearance of former White House Press Secretary Kayleigh McEnany at the club’s first dinner event, held Feb. 5 at 1 Memphis Street in Hernando, along with other donations.

“The reason we chose the Palmer Home was with Kayleigh McEnany’s love for the next generation, the children.” said County Seat Lunch Club PAC founder Ben Piper. “We thought it best to choose an organization that does amazing things for children in DeSoto County. That was where our heart was.”

McEnany was the Press Secretary for former President Donald Trump’s administration in Trump’s final year in office. Prior to working in the White House, Kayleigh worked as the National Press Secretary for the Trump Campaign and was the national spokesperson for the Republican National Committee. Before joining the RNC, Kayleigh worked as a political commentator at CNN and across cable news.

“Through the generous support of individuals and organizations like the County Seat Club, Palmer Home has been able to serve thousands of children throughout Mississippi, Tennessee, and beyond for 127 years,” said Molly Coleman of the Palmer Home. “We are honored to be chosen as the recipient of the 2022 County Seat Club event, and we are so grateful for their generous support which helps us continue to serve children and families in need.”