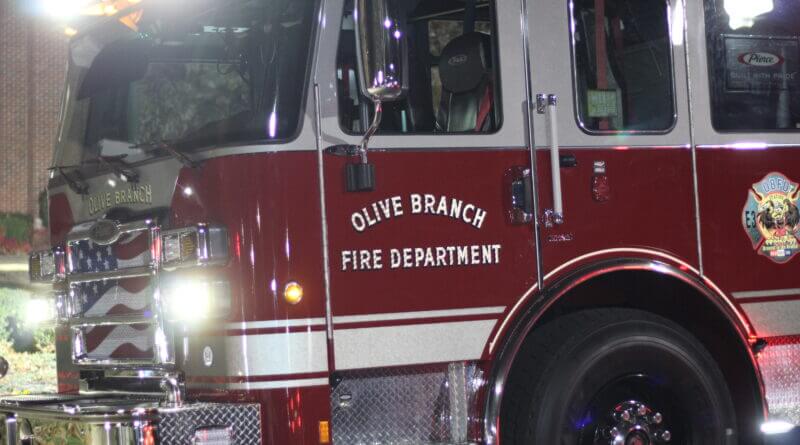 Olive Branch city and fire officials showed off the latest piece of firefighting equipment it has acquired.

The new weapon in fighting fires is a 2021 Pierce Enforcer Fire Pumper, which was parked for inspection by aldermen and Mayor Ken Adams ahead of Tuesday night’s board meeting at the Olive Branch Municipal Court building.

“This new truck will be used by our outstanding fire department professionals to enhance fire services to the citizens of Olive Branch,” Adams said.

“It is a commercial industrial pumper,” said Fire Chief Johnny Eason. “It has a 500 horsepower diesel engine in it. It will pump 2,000 gallons per minute and we bought one that big because of the fact that it will be in the industrial park and for the building we are going to need that.”

Eason added that the truck has 80 gallons of foam injection in it for flammable liquids. Altogether there is 2,500 feet of loose hose and 1,200 feet of 12-inch hose.

“We’re putting the one that is out in the industrial park area now to a different station where it will make fewer runs,” Eason said, saying the new truck will be at Station #3 on Hacks Cross Road.

“We’ve been trying to buy a new truck every 6-7 years, getting each one paid for and then turning around and buying another one to keep the fleet moving,” Eason said.

“The public’s safety has been priority number one with the Board of Aldermen and me,” Adams said. “It’s going to continue being priority one and I think this is a great asset. We’re growing at a fast pace and we need good equipment to protect our facilities and our citizens.”