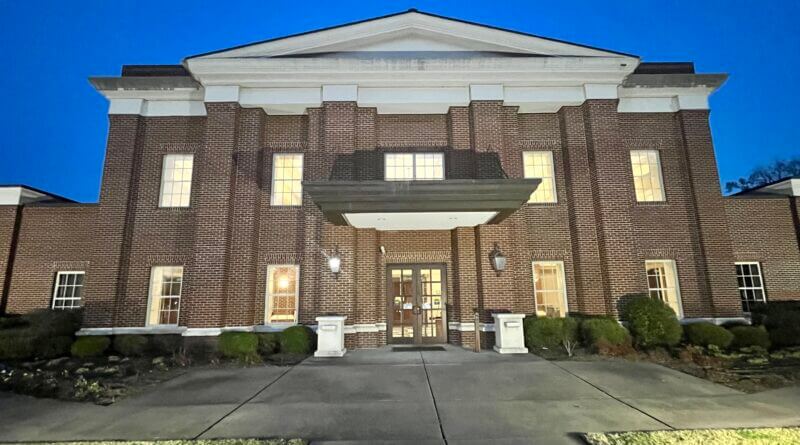 Olive Branch Board of Aldermen met Tuesday evening with the following actions taken:

* At Mayor Adams’ recommendation, the Planning Commission has begun requiring developers who are requesting a zoning change in Olive Branch to include installing a 4 ft. X 8 ft. notice of zoning hearing on the land of the rezoning request, red in color and white letters so citizens will be better informed that a zoning hearing will take place if they desire to attend and support or oppose the zoning change request.

* The Board of Aldermen agreed to share costs with DeSoto County Government and the other Cities in the County for the 2023 Metropolitan Planning Organization fees.  Olive Branch’s portion is  $18,245.31.

* The Board declined to approve a $1.2 million dollar expense that would have resulted in a $700K grant from MS Dept. of Environmental Quality to make repairs to Shahkoka Dam roadway and levee.

The 2022 draft update to the Comprehensive Plan 2040 is on the City’s website and open for review and comment as well as the schedule for the public input meeting and formal adoption.

The plan is being updated for the new city boundary established in the May 2021 annexation of 18 sq. miles and 6600 residents and to incorporate 2020 US census information that was not available when the Comprehensive Plan was adopted two years ago. We are taking the opportunity to refresh and update the Future Land Use Plan and Future Land Use Map as well as the Plan’s Goals, Objectives and Policies.

We encourage citizen input as to modifications they want to see in the City’s future land use.  We are accepting comments on social media and encouraging citizens to attend the upcoming public meeting on this item.

The airport has been closed for nearly two weeks while the airport runway has been undergoing a complete resurface project.  The 6,000 foot runway has now been totally resurfaced and the airport resumed normal operations on Saturday, Sept. 3, 2022 at 7:00 a.m.  While the airport was closed significant work and general improvements have taken place related to airport grounds, the terminal building and hangars.  Special thanks to the Public Works, Parks, General Services, Fleet, IT, and Building Departments for their excellent work and support.

Southwest Tennessee Community College and Air Venture Flight Training co-sponsored a ribbon cutting event on Aug. 30.  This event featured several speakers and was attended by local media.  The event was held to recognize the Aviation Operations Technology program that is being rolled out to individuals interested in pursuing careers in areas of Aviation Administration, Flight Dispatch, and Professional Piloting.  In addition to creating some great career opportunities, this program will benefit the City’s airport with the increased activity and associated services the airport team will be providing.

The first phase of the replacement of all 17 Warning Sirens via the awarded grant $560k will begin on Sept. 7 with the meeting of the FEMA Liaison. Further updates will be forthcoming as we progress.

The City Of Olive Branch completed its first annual Online Open Enrollment. Based on the feedback from our employees, the process was a success and the portal was user friendly.

The Wesson House had approximately 60+ people tour our first Mayor’s home, Saturday, August 27th. We also had 8 classic vehicles placed throughout the front yard to make visitors feel like they were traveling back into time. Sarah Camp dressed the part for the tours as well.

Upcoming Wesson House openings include a Plant Swap (September) and Senior Day (October). Special thanks to our Parks and Recreation Department for the work they did for the Wesson House event.

Communications Coordinator Andrew Perry, Comm. Manager Jay Nichols and I hosted the second Mayor’s Pastoral Advisory Committee, Aug. 29 and discussed the upcoming Faith and Blue Weekend, Oct. 7-10. We have settled on having a “Serve Day” in conjunction with the Olive Branch Police Department who will have officers at the various locations where churches are serving. We will have an interactive map available for the community to locate the various ways churches decide to serve. This will be from 8am until noon. Chief Cox plans to have an open house and cookout on Oct. 10, at the Olive Branch Police Department, from 6-8 p.m. for a kick-off to Meet and Greet Mondays.

We are working on our Fall/Winter “Branch Advisor” Newsletter and plan to have it mailed out before the end of September.

“Bucking in the Branch” is scheduled for Sept. 24 at George Harrison Park (Soccer Fields). This event will include barrel racing as well.

Thursdays in October begin with our Movies Under the Stars on the Wesson House lawn at 7 p.m. The last Thursday in October will also include our annual Trunk or Treat through Old Towne from 6-7 p.m.

Communications is working on securing a headliner for OB Fest 2023, marking our City’s 150th anniversary since incorporating. This will be a HUGE event and will most likely occur early to mid-June, depending on entertainment’s availability.

Resumes our Citizens Police Academy (CPA) on Sept. 15 for the first time since the Covid pandemic began. They are also excited to be participating in Faith and Blue Weekend in October this year for the very first time. Our officers and staff will be partnering with area faith based organizations to participate in service projects across the city. The event will culminate on Monday, Oct, 10 at the PD for an open house and cookout.

We completed the traffic study on Craft Road around I-78. The Cities and County Stormwater Board are working on a Tree Ordinance, Post Construction Ordinance, and Stream Buffer Ordinance.  Woodland Lake bids were open and hope to be awarded soon. Evaluation of Stormwater Policy enforcement procedures.

On Aug. 23, I presented to the Corp of Engineers regarding assistance for Nolehole Creek and Shelby Branch erosion concerns and asked for their consideration to enact a fix.

Senior Center Day at the Movies is a program that was started in July of this year and it takes place at 2pm on the 1st Thursday of every month. The program has been very successful, averaging over 20 seniors each month. The seniors are treated to popcorn, lemonade, and tea while watching their movie. There have been nothing but rave reviews from all participants and the majority of them leave saying they cannot wait for next month!

The Sr. Center Craft Fair event is being proposed to take place on Saturday, Nov. 5. This event is scheduled to take place at the Senior Center from 9:00 a.m. to 3:00 p.m.  Various vendors are expected to be on site selling home baked goods and a variety of crafts.