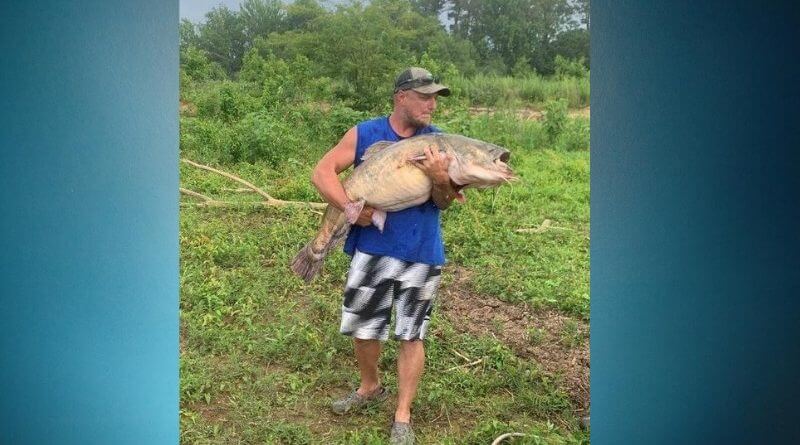 A near record 81 pound catfish was recently caught in Desoto county, according to a release from the Corp of Engineers.

The guide service, Southern Boyz Grabbling, used the lake’s natural structure and a weighted wooden box to catch the 81.2-pound female flathead catfish by hand. At 54.5 inches long with a 36.5 inch girth, the catfish was just 8.3 pounds shy of the current state record. Fishermen Dalton Scott, Josh Bennett and Jacob Bennett were guiding a client through her first grabbling experience at the time. Scott discovered the catfish when he checked the box and quickly secured it with a stringer.

“The catfish instantly hammered my hand as soon as I reached into the box,” said Scott. “Her mouth went all the way up to my elbow, and she began to thrash around.”

Scott’s client then retrieved the fish from the box and brought it to the surface. The group opted to swim the catfish to shore rather than risk losing it in an attempt to maneuver it into the boat. The fish was kept overnight in a large aerated tank and weighed on a certified scale the following day.

The fishermen contacted the Arkabutla Lake Field Office to inform the staff of their find and brought the fish to the office. Park rangers supervised the fishermen’s safe release of the catfish back into the lake. The fisherman said they hoped to catch the fish again in the future when it has gained enough weight to be the new state record.

The sport of hand grabbing catfish, sometimes called noodling or grabbling, has existed for decades and grown in popularity from online exposure as well as advancements in technology and techniques. Anglers supplement the lake’s natural structures by building weighted wooden boxes to attract and hold nesting fish. Catfish strike at moving objects near their nesting site, and hand grabbers take advantage of this behavior by using their hands as bait. Anglers can catch many fish from the same spot in a given season as catfish move in and out of nesting sites while they spawn.

Arkabutla, Sardis, Enid and Grenada lakes, the four Mississippi flood control reservoirs in the Vicksburg District’s area of responsibility, were authorized by the Flood Control Act of 1936, which provided a plan designed to address flooding that originated in the Yazoo Basin. The four reservoirs are used to hold runoff, or excess rainwater, as a flood-prevention measure. With approximately 3.2 million visitors each year, the north Mississippi lakes also contribute approximately $82 million into the local economy.

The USACE Vicksburg District is engineering solutions to the nation’s toughest challenges. The Vicksburg District encompasses a 68,000-square-mile area across portions of Mississippi, Arkansas and Louisiana that holds seven major river basins and incorporates approximately 460 miles of mainline Mississippi River levees. The district is engaged in hundreds of projects and employs approximately 1,100 personnel.