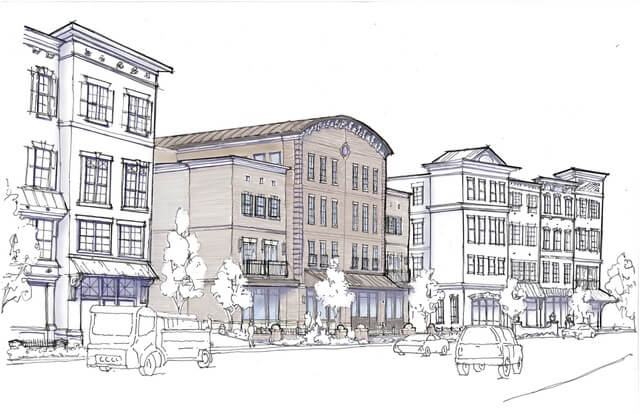 It’s always been said that when the McIngvale Road interchange with I-269 was finished and open to traffic, development along and near the interchange would follow.  The opening of the Gatorade Fieldhouse is one example and another development appears to be on the way.

Developer Jon Stevenson has unveiled plans for what he calls McIngvale Square, a three-building mixed-use development that will feature upscale shops, restaurants, and more.

McIngvale Square will be located in an area along McIngvale Road that now has a maintenance building and materials staging area on it for the Hernando Golf and Racquet Club golf course that Stevenson and Drew DePriest co-own. The 27,000 square feet of retail restaurant space, office space, and some residential will be located on four acres of land.

Stevenson has seen the growth and success of other mixed-use developments and looked at Silo Square for the inspiration that he feels could be replicated on a smaller scale.

“Brian Hill did such a great job with Silo Square,” Stevenson said. “I decided we can’t do anything with this like Silo Square, but we could do something a little bit smaller but really go all out with upscale amenities.”

The design of McIngvale Square will be in line with the town square architecture that is also popular in places like Silo Square, or the Collierville and Franklin, Tenn. town squares.

Stevenson’s plans will be considered by the Hernando Planning Commission next month as a planned unit development. He estimates the $30 million development can reap about $400,000 in city tax revenues.

“Specifically, we have room for one large restaurant, maybe a fast casual restaurant and like a coffee shop/bakery,” Stevenson said. “We’ve had discussions with proprietors for all of those already. We’ve talked to some people about a medi-spa and boutique shops as well. We’re looking at a high-end shopping experience in an area that can handle the traffic.”

It’s expected McIngvale Square will be done in phases. The first phase of dirt work would be done this year with the first building finished in 2023. The entire project would be slated for completion in 2024, Stevenson said.

When the interchange and the rerouting of McIngvale Road was conceived, city officials felt the new roadway and I-269 connection into Hernando could help relieve traffic issues with a clogged Commerce Street. Stevenson feels a business development such as McIngvale Square would aid in that relief.

“We really thought it would be an opportunity to bring in some high-end restaurants and shopping to the east part of town going toward McIngvale Road and the interstate and pull some of that away from the traffic that’s currently so bad down on Commerce Street,” Stevenson explained. “We believe it is going to be a net positive for the city and I think for the citizens.”

“Right now, if you want to eat out, you’ve got to go down to Commerce,” he said. “There’s really no other place to go. The other problem with that is that there are a lot of locations down there but it’s not really great for traffic. It’s like a feast or famine for stores down there.”

He added that within the first 24 hours after he first released the proposal, there were nine existing businesses inquiring about moving into McIngvale Square.