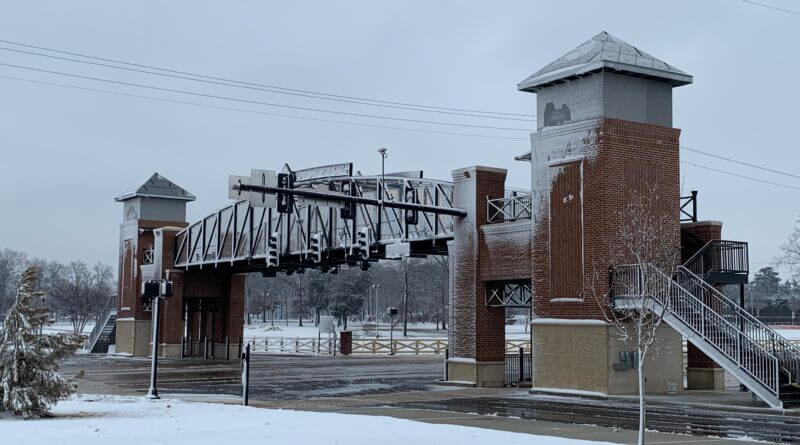 Photo: The May Blvd. Pedestrian Bridge after a winter snowfall earlier this year. The grand opening of the bridge is set for April 14 at 10:30 a.m.

It’s been up and people have likely already used it to cross Getwell Road at May Blvd., but the overhead bridge at the Silo Square entrance is about to be “officially” opened.

Southaven Mayor Darren Musselwhite announced the grand opening of the bridge will be held on Thursday, April 14, at 10:30 a.m.

The event and the opening of the overhead span has been delayed for several weeks due to supply chain issues, but the bridge will be celebrated Thursday morning.

The bridge’s opening will come at a perfect time with Springfest at Snowden Grove Park starting less than a week later on April 19-23.

Musselwhite defended the bridge’s addition to the community in his Mayor’s Report blog post released on Monday, April 11, a post that also announced the grand opening.

Musselwhite said traffic safety in the growing area of Southaven is helped with the bridge.

“Because of the frequent pedestrian traffic that will come with Silo Square and that already existed with Snowden Grove Park events, it is a safer alternative to separate pedestrian and vehicular traffic,” Musselwhite said. “The crosswalks are required by ADA laws in case of an elevator malfunction, but the goal is to encourage pedestrians to stay away from vehicles and cross the bridge.”

The bridge is connecting the paths that will eventually be part of the longest pedestrian trail in the county’s history, Musselwhite said.

It will also connect commerce in the district between what is happening and what will happen in the area. Musselwhite said the area is about to become a prime tourism destination.

“We’ve already attracted numerous pending developments on each side that have vocalized the importance of the bridge connection in making their business model work here,” the mayor wrote. “Again, this will pay huge economic dividends to our city for many years to come and pay for the initial investment many times over.”

Musselwhite adds the bridge will become an iconic symbol to the city.

“This will be the future site of many marriage proposals, prom photos, graduation photos, and a backdrop for many other memorable times of life for our citizens,” said Musselwhite.