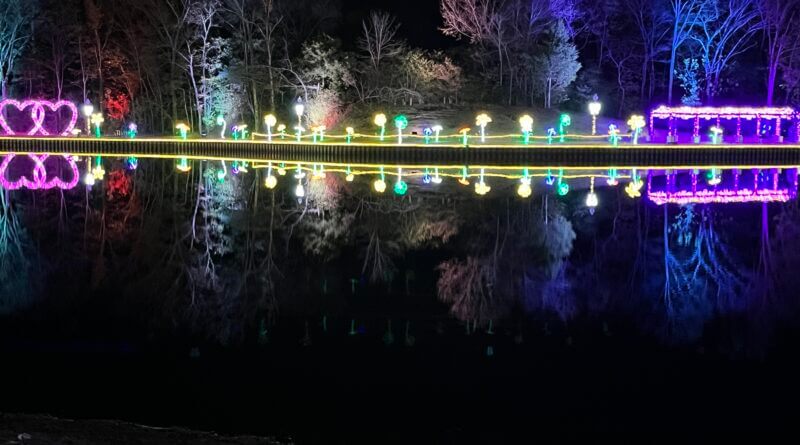 Photo: Holiday lights reflect off the lake at the Olive Branch City Park as part of the Light Garden light show. (Bob Bakken/desotocountynews.com)

A sneak peek preview and ribbon cutting for DeSoto County’s newest holiday attraction was held Sunday night amid rave reviews from those who turned out.

The Light Garden, a walk through holiday light show experience through the Olive Branch City Park opens Tuesday, Nov. 22, but the lights came on for assembled VIPs to see what creator Russell Lehman of The Events Benefits has envisioned. The plaudits for the Light Garden included Olive Branch Mayor Ken Adams, who was in attendance Sunday night for the show’s unveiling. Adams called it “just awesome.”

“A lot of people call things a destination event but this will be a destination place,” Adams said. “The good part is it’s all privately funded, no tax dollars are going for this, but it’s going to allow a very unique experience for people in North Mississippi and Shelby County, so it’s going to be widely visited I think, without a doubt. And, it gives us our fireworks show on New Year’s Eve, which we’ve never had before.”

Those who attend the Light Garden will see sparkling light displays, performances and artisan vendors as they walk through the park, including a walk around the pond at the centerpiece of the park.

A three-year agreement was reached between The Events Benefits and the City of Olive Branch to hold the show at the park. As well as being a holiday attraction, the Light Garden has a benefit to the City Park. Ten percent of the net profits from the show will go back to the city to help improve and further develop the park.

Both Adams and Lehman were quick to point out that the Light Garden is privately funded and no tax dollars are being spent to hold the event. The private financing is coming from Jim Yates of J.L. Yates Services, who said he was impressed with how Lehman wanted to involve the community with the light show.

“I love the way we’re involving the community and the government and businesses to put on a really cool show for the community,” Yates said. “You have business and the community getting together to put on some arts for the people of DeSoto County and the Mid-South.”

More about the event, including online ticket purchases, is found on the Light Garden website.