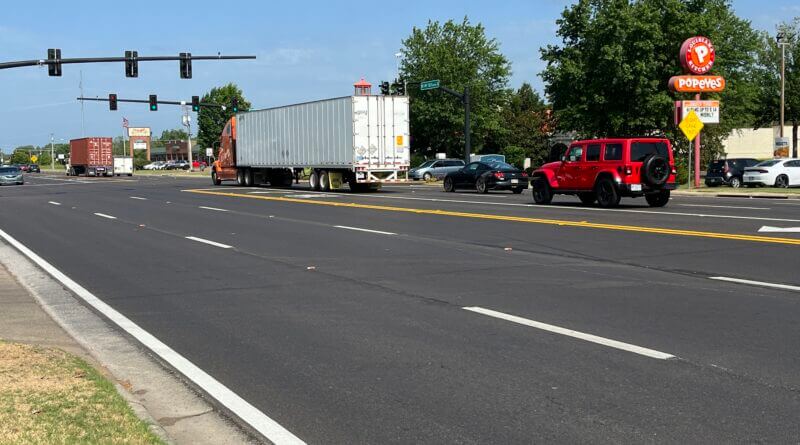 Driver pulls gun at officers and is shot, four officers on leave as a result

Photo: The stretch of Goodman Road West in Horn Lake was reopened after a traffic stop-turned chase ended with a fatal shooting. (Bob Bakken/DeSoto County News)

Four Horn Lake police officers are on administrative leave as the Mississippi Bureau of Investigation looks at an early morning shooting incident on Goodman Road West.

A driver was fatally shot and died after pointing a gun at an officer at the end of a chase that started when police attempted a traffic stop about 1:30 a.m. Wednesday morning on Goodman Road West at Mallard Creek.

Monday afternoon, DeSoto County Coroner Josh Pounders identified the shooting victim as Molka Horton, age 39 of Memphis. Pounders said the body was being sent to the Mississippi Medical Examiner’s office for an autopsy.

The chase continued with the vehicle driving around the pumps at the Circle K gas station at Goodman and Windchase and heading back west bound in the eastbound lanes of the roadway.

After several attempts to stop the vehicle, which again headed eastbound on the highway and entered the Gateway Tire parking lot, the chase finally ended nearby.

Police said once stopped, Horton is alleged to have pointed a gun at one of the approaching officers and it was at that time police responded by opening fire.

Horton was shot and pronounced dead at the scene, according to police.  Officials have not said any more about the circumstances around the traffic stop that started it all.

While investigating the scene of the shooting, Goodman Road West between Interstate Drive and U.S. Highway 51 was closed to traffic until about 7:30 a.m. Thursday morning.

With the incident being an officer-involved shooting, MBI is handling the investigation.