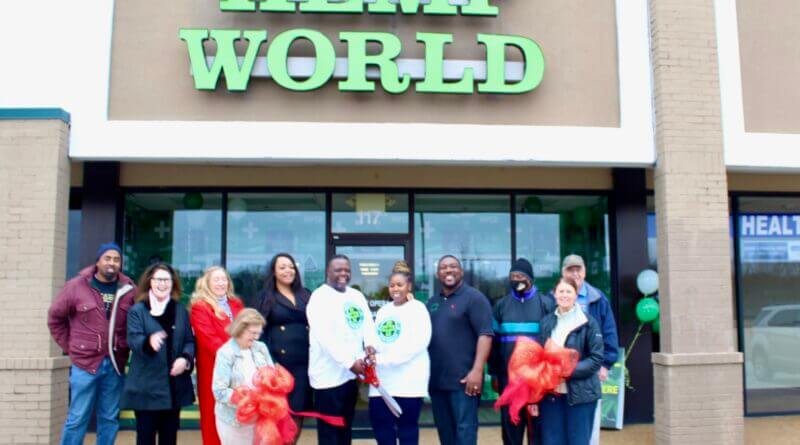 Photo: Ribbon cutting and grand opening was held on Friday, Feb. 25 for Hemp World, a CBD retail location in Olive Branch. The store owners are Lawrence and Jacqueline Williams. The Olive Branch location is one of six in Mississippi. (Bob Bakken/DeSoto County News)

The growing world of CBD grew another outlet recently with the addition of Hemp World, located at 8230 Camp Creek Blvd. in Olive Branch.

It is the sixth location for the Pearl-based franchise and the Olive Branch store is owned by Lawrence and Jacqueline Williams.

The people behind the Hemp World franchise, Santita and Deaundrea Delaney, were in Olive Branch recently to support the Williams in their store opening and the Olive Branch Chamber of Commerce held a ribbon cutting event.

Deaundrea Delaney, in explaining their interest in CBD, said she entered the business because of the benefits she experienced in weight loss and being lifted from medications she took for a number of health issues and problems.

CBD, or cannabidiol, is, according to WebMD, a chemical in the Cannabis sativa plant, also known as cannabis or hemp. It was made legal to use and sell, and since then stores have sprung up all over to promote its benefits.

“It’s all natural,” said Williams. “I know of other persons’ testimonies that it helps you.”

CBD is approved as a drug for use against seizures, but has also benefited those who have had anxiety, pain, a muscle disorder called dystonia, Parkinson disease, Crohn disease, and many other conditions.

Medical officials have said there is no good scientific evidence to support these uses, but Delaney said her company takes extra precautions to ensure its safety and effectiveness.

“We do our own certified testing to make sure it is legitimate and there’s no unsafe materials,” Delaney said. “We provide our own testing aside from anything the company does to make sure that our products are safe and effective.”

Delaney said Hemp World offers more than 120 products in different forms and all are certified.

One area that stores like Hemp World may get into in the future is as a dispensary for medical marijuana. Gov. Tate Reeves this legislative session has signed into law a bill allowing for the sale and processing of cannabis for medicinal purposes in Mississippi.

“It’s been a long, hard fight and battle for people here in this state,” Delaney said.

Questions still remain and cities are currently looking at the possibility of opting out of allowing medical marijuana to be sold in their community. Municipalities and counties have until May 2 to determine if they will opt out of the law.

If opt outs occur, cities and counties may opt back in at any time. However, if the governing body opts into the law, then they cannot opt back out.

Where opt outs occur, as they have in some Mississippi cities already, citizens may then petition for a referendum that could override the opt out, if approved.

Williams said Hemp World is looking at what happens in Olive Branch before determining if medical marijuana will become part of their store selection.

“We’re looking at it,” Williams said. “We’re trying to get more understanding and the rules and regulations on it to see where it does lead. It’s a good possibility.”

Visit the Hemp World website to learn more about the franchise and the Olive Branch store location.

One thought on “Hemp World opens store in Olive Branch”